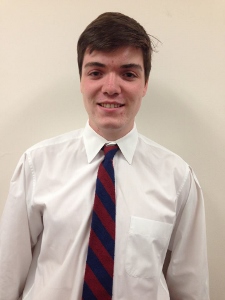 Left: Resident Joe Walsh has been working as a summer intern for Representative Carolyn Dykema this summer.  (Photo from Facebook)

It’s time for another roundup of resident news. Some of these were reports by local media. Others were shared.

(If you know a resident whose actions are noteworthy, shoot me an email at mysouthborough@gmail.com.)

James Rizzitano’s interest in chess started one summer when he was around 11 years old. After he was stung by a bee and had a very allergic reaction, he was cautious for the rest of the summer playing board games and reading. He first read about how to play chess in a book, and since then, Rizzitano, a Southborough resident, has played 2,500 games in tournaments, become an International Master, and written five books on the game of chess. (read more)

How I Spent My Summer Vacation: An Interview with Teen Preservationist Bridget Brady – PreservationNation Blog (National Trust for Historic Preservation):

[From the Q&A session with Brady.] I was always interested in the house. I would drive by it all the time. It’s on the way to my old school, and I played lacrosse, and I always liked to look at it. It’s kind of like the castle of our town. So that was when my first interest in the house started.

And I love history, too. Once I got older, I started to develop a bigger interest in old stuff. I love old stuff, and I got really interested in the house that way. And I also started loving architecture, too, a couple years ago. I like to draw houses. And then [learning about] the Boston Terriers added on a whole other layer. (read more)

Locals cycle for a cause – Southborough Wicked Local:

On [August 3], thousands of people will straddle their bicycles and head out to a special destination – a cure for cancer.

Among that group will be many local riders, including Christine McCarthy, of Southborough, a cancer survivor who, since 2008, has raised $150,000. . .

[McCarthy], who is 49, has been riding in the PMC since 2008 and raised $150,000. “I suffered uterine cancer 2006-2007. While waiting for lab results on whether I’d need chemo and radiation after my radical hysterectomy (at age 41), I committed to riding in the PMC some year to follow even though I hadn’t ridden a bike since high school.

“I rode in 2008 and haven’t stopped. My sister was one of my greatest supporters. She was diagnosed with breast cancer just after my first ride and passed away 20 months later. She’s a huge source of inspiration,’ (read more)

I am excited to welcome Joe Walsh from Southborough as a summer intern this week! Joe is a rising senior at BU Academy High School who hopes to pursue international relations in the future. He will be helping my office during this busy final week of the legislative session. I always enjoy welcoming students to Beacon Hill to learn about government and public policy, and I look forward to working with Joe.