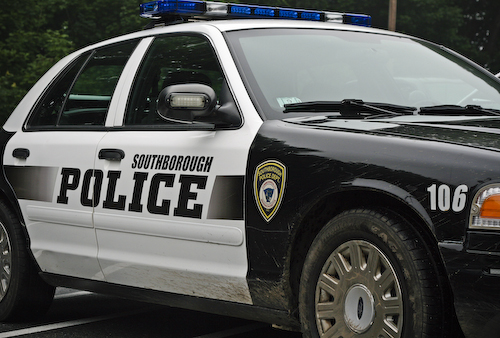 Southborough Police announced that they are now equipped and trained to use Narcan to save lives.

In July, the department got approval to equip cruisers with Narcan.  At that time, Chief Kenneth Paulhus pitched to the Board of Selectmen the necessity and safety of the measure.

Paulhus told the board that the Governor had declared opiate overdoses a public health emergency. The town was able to take advantage of a state grant fully funding Narcan for police use.

The chief further explained that in the past, responders had to wait for “rescuers” to administer a needle. Now officers who are first responders on the scene can use a nasal spray. 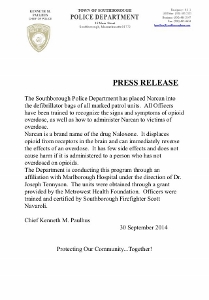 The injector is carried with defribillators that officers already use to help in medical emergencies.

Paulhus stated that officers wouldn’t give it to just anyone found passed out. It would be used only when there was evidence or knowledge of probable opiate use.

If there is a misdiagnosis, there are no purported side effects.

The program is overseen by a Marlborough Hospital doctor.

For more information, click on the press release to enlarge.

Sounds reasonable but I’m wondering if I’m the only one who isn’t very familiar with “opiod”–I can assume that it is related to opiate but then…. Maybe an example of what one would be ingesting to have an opiod atttack would help? What are the signs/symptoms that would tell the officer that someone has had an overdose?
Maybe I’m not watching the “right” TV shows!
Thanks for any explanation for the sake of my curiosity and I assume maybe of some others, too.
Donna

According to Wikkipedia: “An opioid is any psychoactive chemical that resembles morphine or other opiates in its pharmacological effects.” That includes heroin.

Opiate overdose symptoms and signs include: decreased level of consciousness and pinpoint pupils.Heart rate and breathing slow down, sometimes to a stop. Blue lips and nails are caused by insufficient oxygen in the blood. Other symptoms include seizures and muscle spasms. A person experiencing an opiate overdose usually will not wake up even if their name is called or if they are shaken vigorously.

On a personal note, having been in EMS for over 30 years, the most dangerous problem with opioid abuse is respiratory depression. Lots of these folks stop breathing, and by luck are discovered with just enough time to spare. And most of these people are doing it on a regular basis without anyone knowing until an overdose. Be aware, and be sure to call 9-1-1! Time makes the difference!

Thanks for the clear explanation.