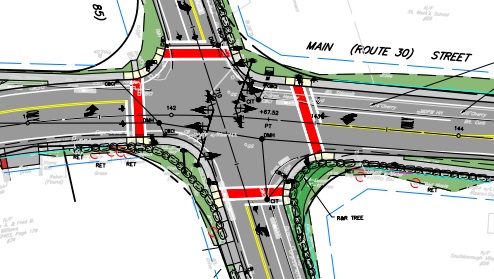 Above: While it’s still designed bigger than the actual roads, a trimmed redesign of the Routes 30 and 85 intersection is touted as being as small as possible for the Main Street reconstruction project. (Image from DPW’s 25% plans)

Tuesday, the Main Street Design Working group presented their update to the Board of Selectmen. They shared revised plans based on their recommendations for the reconstruction project.

The new plans were pitched to and generally accepted by the board as the best version of the plan to date. Yet, selectmen Bonnie Phaneuf and Paul Cimino asked to hold off on voting that night.

Phaneuf asked that the community have a chance to see the materials and be notified of the vote. She pointed out that the agenda listed the item as an update, not a vote.

Chair Bill Boland stated that other business without language specifiying a vote (a liquor license also under “Appointments” agenda) was approved. And he argued that people will always find something to object to.

Boland counseled moving forward so the Mass Department of Transportation could schedule a public meeting they hoped to hold in November.

Phaneuf rebutted, “The DOT doesn’t pay taxes in Southborough.” She argued the issue was too important to the town to rely on semantics for the right to vote that night.

The new “25% plan” scheduled for a vote of support incorporates changes from the group’s back and forth with MasDOT and VHB (the town’s engineering design consultants). It was supplemented by the working group’s list of pros and cons for their revisions.*

The group was in consensus on most items, but not in full agreement with every detail or how the town should proceed.

Member Steve Phillips, a Main Street resident, continued to urge the board to research an alternative plan under Chapter 90 funding.

One of the benefits that he pointed to was tackling the project in smaller sections. He said it would lessen the impact on the community. And he believed the town might be “pleasantly surprised” by what could be done. He was supported by member Claire Reynolds.

Boland furthered that Chapter 90 funds still require approval from the state. And he counseled that any approved alternative would look “awful lot” like the current plan.

Selectman John Rooney said that while he respected all members opinions, he gave special weight to Boland’s expertise as the person who was responsible for maintaining the town’s roads for so long. He said that Boland swayed him to believe that pursuing an alternate plan wouldn’t make sense.

The new plan still includes the controversial 4 turning lanes at the intersection of Routes 30 and 85. But the group believed they made the “large intersection as small as it can be.” A turning arc was reduced to retain more of the Community House property.

Earlier iterations were designed to allow regular turns by a large towing truck pulling a tractor trailer. That was due to the location of a downtown towing business, Ted’s of Fayville.

At the previous Main Street update, selectmen decided to reach out to Ted’s to ask if they could find an alternate route. The business and town apparently came to an understanding. Since the specific towing is something that happens about once  a month, Ted’s will notify the town in advance.

Another improvement was insertion of grass strips between curbing and sidewalks wherever they could fit them in. (VHB said that any strips that would be narrower than 2 feet aren’t feasible to maintain.)

Most of the plans details were approved by the working group unanimously or 6-1. The exceptions:

The board opted not to vote on those specifics until after voting on whether to pursue moving forward with the plan.

Upon questioning, VHB and the DPW clarified for the board:

On Tuesday night, Bill Boland made a motion to approve moving forward with the project, supported by Rooney. He withdrew the motion based on Phaneuf’s and Cimino’s request to delay the vote. Selectman Dan Kolenda participated remotely for much of the discussion, but had to sign off before discussion of a vote. Before signing off, he voice support for the plan.

Cimino praised the working group for their great work. He and Phaneuf both agreed with the other selectmen that the plans were the best to date. But neither specified how they plan to vote.

The vote is scheduled for the night of Tuesday, November 18. For a look at more related materials, visit the DPW’s website. You can watch the meeting through Southborough Access Media’s video streaming, or check for rebroadcast times.

*Note on the Working Group’s Pros and Cons list: The items are broken out by section. Each section is divided by “1” (the previous plan) and “2” (the revision approved by Working Group vote).

Last night I was watching a rerun of selectmens’ meeting of 10-21, the topic being Main St.
Several references to the “strip mall” on Main St. were made. We do not have a strip mall on Main St. Could someone clarify?

Also, it would be helpful if someone were appointed to moniter the mikes at these meetings so the speakers can be heard. What good is it if you cannot hear what is being said.

I don’t recall the mention and couldn’t find it in replay. But in the working group’s written report they refer to a strip mall on the north side of Route 30 between public safety and School Street. Therefore, it must be how they refer to the businesses at 11 Main Street.

OK, once again, these guys are killing me. Board chairman Bill Boland wanted a quick vote on the changes before the community could see them because someone might object. Thank you Ms. Phaneuf for upholding our rights, be they legal or merely small town neighborly common courtesy. Then member John Boland , former long time DPW director, talked about the terrible state of the road. If he was in his job for so long and the road is in a shambles, then why does John Rooney give special weight to his opinions. Next thing you know the present DPW director will be asking for a new pick-up truck due to over-use in last years snow storm…oh, wait, she already did.

The spoken word at the bos meeting of 10-21, referred to a strip mall on Main St.
Do you think Doc Hallisey or his tenants regard this well maintained professinal building as a strip mall?

Please call it whatever you like so long as it does not derail or push out this long overdue project. Worse still, there might be some group that will find a “better” place to spend the money like restoring an old historic house or full time kindergarten.

Frank, you got that right. The town will have to” spend the money”. Although this plan has been presented as being paid by the DOT, or the state, the fact of the matter is that we, the taxpayers will have to “spend the money” to accept all the substantial bills for many of the improvements that DOT does not include in said plan, and it amounts to millions.