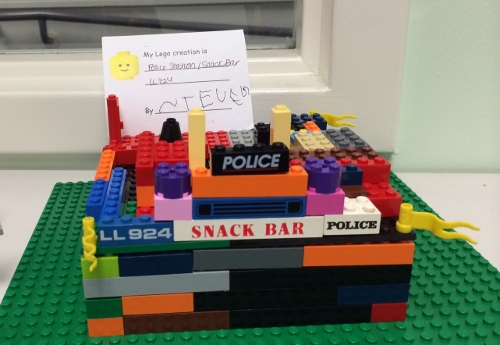 Above: The Town is a long way off from drafting designs for a new Police and Fire Station. But I can’t resist sharing one child’s vision from the Library’s recent Lego Day. Instead of combining Police with the Fire Department, how about adding a snack bar? (Photo by Beth Melo)

This week, selectmen voted to form a “Public Safety Study Committee”. The overall goal is to help the Town move forward on a Public Safety Building project.

The specific charge and timeframe are still to be determined. But the committee will identify potential sites on Main Street and Cordaville Road for a combined police and fire station.

The two roads were identified by a 2006 study as the ideal locations for Fire Department response time. (For more detail on that, click on map to the right to enlarge.)

Until now, research on the project has been done by Town employees including the Town Administrator, police and fire chiefs, Treasurer, and Facilities Director. They have been researching issues and updating selectmen along the way.

Earlier this fall, the group pitched the necessity of a new building. They made a case that the current state of buildings is untenable and that repairs and renovations don’t make fiscal sense.

In previous meetings, the group asked to form a committee. Each time, the board postponed the action, assigning more homework.

After the group presented its latest findings this week, the board deemed it was time to recruit the committee. Selectmen approved comprising it of the two chiefs, an Advisory Committee member, and three residents. Other critical employees will attend relevant meetings but not as members (e.g., Facilities Director, DPW Director).

Now the Town is recruiting to fill the seats. The board hopes to have names to consider at their next meeting.

Selectman Paul Cimino urged the group to return with a recommended charge and timeframe. Lauding members of the Main Street Design Working Group, Cimino said it should be used as a model.

He explained, “a focused charge with a focused time frame produces great results.” He conceded that the charge for this committee may be broader, but  they will still need to “set an agressive schedule”.

Selectman Dan Kolenda concurred. Referring to project research dating back to 2006 and a study done in 2007, Kolenda said he didn’t want to see this still under review in another 8 years.

Purple clarified he doesn’t expect a committee to be done in time for Town Meeting this April.

Anyone interested in joining the committee should submit a cover letter and resume to selectmen@southboroughma.com by December 10th.

[Note: The presentation also included an interesting look at what the domino effect on Town Buildings could look like if Police and Fire are relocated. I hope to find time to share that in a post tomorrow/next week. So, stay tuned.]