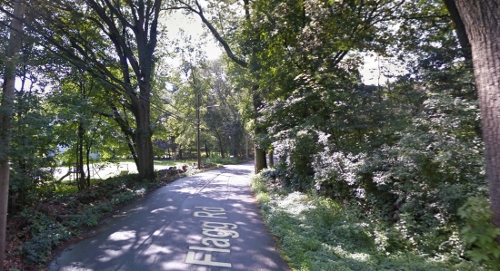 Above: The Planning Board purportedly objects to projects that would add traffic to and change character of this and other area backroads. (Image taken from Google Maps)

Two controversial projects are up for vote at tonight’s Zoning Board of Appeals meeting. Southborough Wicked Local is reporting that another board is urging the ZBA to deny the permits.

The linked projects would result in 180 condo units, plus approx. 90 new townhouses (single, double, and triple).

Both of Capital Group Properties’ projects are located at Park Central with planned access to Flagg Road. According to SWL, the Planning Board is concerned about the impacts to the road and area.

While neighbors have objected to the developments from the start, the ZBA has appeared inclined to approve them.

Chair Leo Bartolini has indicated at meetings that he believes the boards’ hands are legally tied on the 40B project. And the townhouse project was developed at his urging. It’s part of the chair’s efforts to avoid additional 40Bs on the site.

Dan Hill, an attorney representing some of the abutters, cautioned the ZBA about prematurely approving the Use Variance for Townhouses. Bartolini said that details would be up to the Planning Board to approve. But Hill advised that if the ZBA didn’t vet the project carefully, the Planning Board’s hands would be tied on what they could enforce.

Now that board is publicly weighing in. SWL reports:

On Tuesday, Planning Board Chairman Donald Morris wrote two letters on behalf of the board to Bartolini, one of which recommends the ZBA deny the proposal because of safety fears about heavy traffic pouring onto Flagg Road, a narrow tree-lined street, and other back roads. Morris said the proposal would need significant upgrades that would destroy the rural character of the nearby streets such as cutting down mature trees and altering stone walls.

“The increase in traffic volume will produce an unacceptable level of risk to existing residential neighborhoods,” Morris wrote. “No project, industrial, commercial, residential or 40B has ever been approved in this town town that would have such a significant impact on safety. ”

The board’s other letter said members have problems with the ZBA granting a variance for DePietri for another piece of property where he wants to build apartments in exchange for agreeing to make all the Park Central 40B affordable units into rentals.

“We question if it is appropriate to include discussion of use variance on land being reviewed under the Chapter 40B process,” Morris wrote.

Selectmen discussed the letter Tuesday night, but did not take any action.

The letter recommends the ZBA speak with “town counsel immediately to represent the town and guide the ZBA, Planning Board and other town officials through this process.”
“These matters are complex and sensitive,” Morris wrote. “The neighbors and the proponent have legal counsel.”

The Planning Boards concerns about traffic aren’t new to the conversation. It’s been the focus of much of the criticism from neighbors. But 40B related concerns have been over-ridden by reports by traffic consultants.

The ZBA brought in a peer reviewer to vet the developer’s traffic studies. They informed the board that the increased traffic from the 40B wouldn’t “fundamentally [alter] the use of the road”. However, they did caution about future development. (That report was conducted before the use variance permit application was submitted.)

For past coverage of the Park Central project, click here.