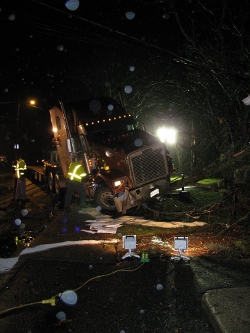 Downtown was the cite of a crash and  major diesel spill late last night. A tractor trailer ran off the road and into a tree. Fortunately, there were no injuries.

Emergency crews were managing the scene and mopping the 50-75 gallon spill until about 3:00 am. The road is now open, but more cleanup is scheduled.

A reader notified me that nearby residents were evacuated around 11:00 pm as a result of the spill.

At approximately 10:40 p.m. on 12/10/14, a call was received for a motor vehicle crash in front of 5 Main St. E-23 and A-28 responded and arrived on scene to find a tractor trailer truck that hit a tree in front of the Southborough House of Pizza. There were two large fuel tanks on each side of the truck and one was leaking a large amount of diesel fuel onto the ground. The driver of the truck was uninjured. Fire crews were able to contain the fuel spillbut approximately 50-75 gallons of fuel spilled from the tank. The Mass. [Department of Environmental Protection] was notified and responded and a clean-up crew was sent to mitigate and clean up the spilled fuel. The fire crews remained on scene until the vehicle was remove at approximately 3:00 a.m.

Southborough Police reported on Facebook that the driver was arrested for alleged drunk and reckless driving. The post shared:

The operator was placed under arrest by Southborough Police at the scene of the accident. He is being charged with OUI Alcohol and Reckless Operation of a Motor Vehicle. Main street is currently open, but the DEP plans on returning this morning (Thursday) in order to do a more thorough cleaning of the area.

The post included that National Grid was contacted to cut the power during cleanup. And Mass State Police are involved in investigating the incident. (read more)

Updated (12/11/14 2:40 pm): I just realized that the original text for what I previously cited as Community Advocate posting was actually the SPD Facebook post.

Just what we need. Tractor trailers in the town center. What was wrong with taking rt9 ?

I am not defending the operator but there are lots of reasons why a tractor trailer would be on Rt 30. They could be making local deliveries, they could simply be trying to get from point a to b by the quickest route. They could just like the scenery or the PIzza.

Rt 30 is a state road and tractor trailers have as much right as the rest of us to use it.

Deliveries. Did you even see that trailer? “Come on” man

The article notes he was charged with OUI…so who knows if he knew where he was going.

If he was drunk, they should revoke like every license he has. I’m talking gun, dog, fishing as well as his drivers license. Drunk driving in a fuel truck….OMG! Whats next? Airline pilots? Oh wait, that did happen….a lot. High doctors doing brain surgery? Oh wait, that happens so much that they have programs for them. Nevermind!

Again, I am not defending the driver but this was a flatbed trailer truck, not a fuel truck. The fuel came from the fuel tanks common to all tractor trailers.

Hopefully someone will check to see if his trailer was overweight, and if he checked into the required weigh stations during this trip. I’m always concerned when a tractor trailer is a long way off the major roads.

It may help to know that according to Community Advocate’s post the State Police “Truck Team” will investigate the accident.

I think if you look at the pictures you will see that he was driving a flatbed truck with no load. Which does not excuse being drunk, if he was.

Just a note, this is not a fuel truck, it is a empty flatbed. It was probable not overweight. The fuel was from the trucks own fuel tanks which can probable hold a couple of hundred gallons. The driver would not have been required to have additional licensing as a fuel tanker driver would. All that being said I have to agree with everyone else that the drinking on the job was not the best idea. He will probable not have a license after this.

Good grief. Show of hands: how many of you were there ? How many of you were affected by the ‘evacuation ‘? Loss of power? Anyone hurt? Please. No one was in the truck. No one knows why he drove down the street. Relax people. Enjoy the holiday. Spread good cheer. Please.

+1 Bill well said. Accidents happen. Southborough is not in a bubble people. Thanks to our fire and police departments for keeping us safe.

I was there. I live on Main street about 100 yards away from the accident. I was not told to evacuate nor did we experience any power outages. I did take pictures of the accident. Those that live on Main Street can attest that we regularly see trucks traveling well over the speed limit dangerously entering the small town center. Lately there has been no effort to enforce speed limits along Main Street. Accidents like this are likely to continue if there is no effort to enforce traffic ( and zoning ) laws in the Town center.