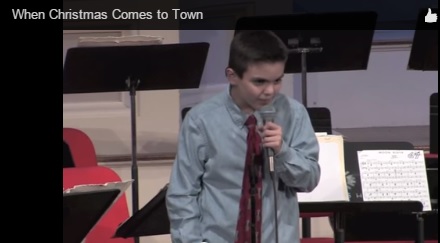 Above: Southborough’s Bobby Saldi performing at NECC’s annual fundraising concert. (Image from video by The New England Center for Children)

Southborough is home to a new You Tube star. Resident Bobby Saldi recently performed solo “When Christmas Comes to Town” in front of a large audience at Mechanics Hall in Worcester.

His video’s reached over 10,000 views since posted last month.

In it, the 11 year old performs with increasing joy and confidence. But it’s not his voice or age that has garnered attention.

The performance was at fundraiser for Southborough’s The New England Center for Children. As you may know, the center is a school for children with autism. Saldi is one of their students.

Southborough Wicked Local ran a story on the inspirational student.

Unlike most school, the NECC doesn’t normally feature student performances in their concerts. According to SWL, this was the first time and limited to two students:

“Usually it doesn’t go well,” [NECC’s Courtney] Howe said. “You never know what a student will do on stage, because it’s a little out of character for them.”

But when a student like Bobby succeeds, she added, it can provide a powerful message, especially to parents of newly diagnosed autistic children who are afraid for their little one’s future.

“Here they see this child getting up on stage and singing like an angel,” she said. “And it gives them hope, that their child could do that too one day.”

Wish I could do what he did! Impressive.

I’m family friends with the Saldis. Bobby and his twin brother Franky are exceptional children. They are very lucky to attend such a premiere school as NECC. I know Bobby, his family, and his teachers put much effort into his performance. Getting Bobby ready, building his confidence, and hoping he was comfortable to perform was a challenge. When you hear him sing, you know the prep and dedication was 100% success.

As a side note, Beth, the Saldis live in Framingham and are not residents of Southborough.. The twins are both students at NECC.