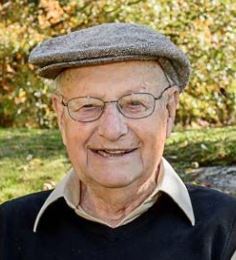 He was born October 20, 1914 in Southborough and was a life-long resident in town. For more than 45 years he worked at Deerfoot Farms (Hygrade) as a foreman and then at Worcester Boneless Beef. During his retirement years he drove buses for Gulbankian Bus Co. in Southborough.

Known by many as “Uncle Andy”, he was always there with a helping hand or a ride if anyone needed one. On a summer day he was happiest on his tractor or tending to the beautiful gardens behind his home. Henry and his family shared decades of memories at Mayflower Beach in Dennis on Cape Cod where his family owned a cottage.

He took joy in life’s simpler things; family gatherings at his home in Southborough, making homemade pasta and bringing it to family and friends, and above all else caring for and spending time with his beloved wife Lena.

A Funeral Mass will be celebrated Wednesday January 7th at 11:00am at St. Matthew’s Church 105 Southville Rd. Southborough, MA 01772. He will then be laid to rest with his wife Lena at Rural Cemetery in Southborough. Henry’s family requests that you honor him with donations to The ALS Association Massachusetts Chapter 315 Norwood Park South Norwood, MA 02062 or online at www.Webma.alsa.org.