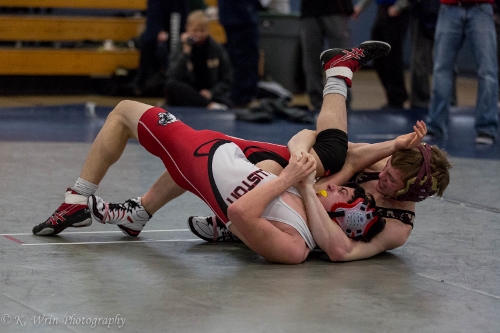 Above: ARHS Wrestling at a recent Framingham meet. This week, they are looking for support at the first season home game. (Photo of Austin Roche by K. Wrin Photography – scroll down for more photos)

Before getting to the week’s schedule, I’d like to share a call for support from ARHS Varsity Wrestling.

In pre-season in December, the team won it’s “first ever ever Algonquin Wrestling Team Championship”. This Wednesday is their first match of the season at home. They hope students and alumni will rally to help boost team spirits.

(Scroll down to the bottom of the post for a full update from the team and a photo gallery from recent meets.)

Now, here are the ARHS varsity games on tap for the week.

To find a complete schedule of Algonquin sports, including JV and freshmen match ups, click here. Follow these links for the Assabet sports schedule and the St. Mark’s sports schedule.

ARHS Wrestling Photos and News(click on thumbnails to enlarge)

Drew Cozzolino with a pin at Framingham Tournament

Austin Roche with a pin at Framingham Tournament

Although it’s Winter Break for high school classes all the Algonquin sports teams have been hard at work on the courts, in the rinks and on the mats.

The Algonquin Wrestling team is off to a great start this season and its roster of 25 young men (14 returning and 11 new wrestlers) is one of the largest teams in recent memory. On the opening day of the season the team posted strong wins against St. John’s Shrewsbury 45-30 and Agawam 49-30, losing only to West Springfield by a score of 48-33.

Brian Kramer is in his 4th year as the Varsity head coach and James Gray has been very active working with all the wrestlers in his first season as Assistant Coach.

The Algonquin wrestlers have 2 more multi-team competitions scheduled during the holiday break. A Quad meet on Tuesday, Dec 30 at Natick high school where they will face off against Mid-Watch foe Leominster, BC High and Natick. On Sat the T-Hawks travel to North Attleboro for a “Super Quad” to square off against several powerhouse/ perennial championship teams from across the State.

And finally the T-Hawk wrestlers have their first match of the season at home on Wed, Jan 7 at 7PM against Marlborough. This match will be a battle between 2 competitive teams looking to establish themselves as the favorite to knock off 2 time defending league champion Nashoba Regional. There are 14 weight classes in a dual meet (from 106 to 285lbs) and Senior Captains David Wrin and Nate Morrell are hoping for a strong turnout from Algonquin students and Wrestling Alumni to become the T-Hawks “15th” man (like the Seattle Seahawks 12th man) which can give the wrestlers a “home gym” advantage and help boost the team to a hard fought Midwatch league victory!

Have photos or updates of your favorite team to share? Email mysouthborough@gmail.com.