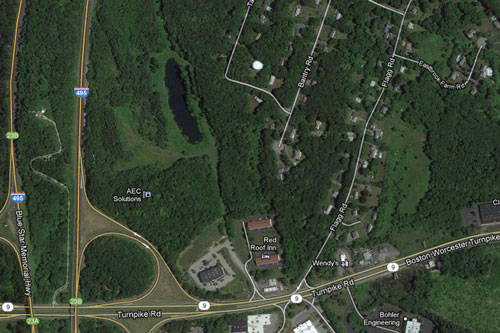 Above: The Park Central proeperty (behind Red Roof Inn) is now again the site of one controversial project in front of the ZBA, instead of two. (Image from Google Maps)

At last night’s Zoning Board of Appeals Meeting, Capital Group Properties’ attorney pulled a controversial deal off the table last night – at least for now.

At the encouragement of the ZBA, the developer was seeking a Use Variance to develop a townhouse project at commercially zoned Park Central. The consideration was to be in exchange for making the 40B a rental project.

Attorney Angelo Catanzaro informed the ZBA that developer Bill Depietri plans to push ahead with his original 40B project. That means that the 180 condos will be developed for sale. Only 25% will count towards Southborough’s Affordable Housing numbers.

Earlier this fall, Depietri responded to requests by ZBA Chair Leo Bartolini to work with the Town to explore acceptable Use Variance project options at the site that would convince him to change the 40B from sale to rentals. (100% of rentals would count as 40B, and put Southborough over the critical 10% threshold.)

The purpose of the deal was to avoid future unwanted 40Bs in town – including two more for sale projects that Depietri told the board he plans to develop on the same site.

The ZBA had been pushing the developer and abutters, who have protested the projects, to work together. Last night, Catanzaro said that effort was unsuccessful.

The attorney claimed that for several months they worked towards a solution:

“We did everything we could, we’ve thought, to accomodate that. . . We’ve actually hit a very small impediment, but that impediment has proven to be the end of the line for my client. So we don’t want to delay any further.

I’ve indicated to the abutters that if something changed in the next week or so, I’d be willing to reconsider it. My client and his investors however are adament that we move forward with this project.”

The board allowed the Use Variance application to be withdrawn without prejudice. Catanzaro said that will allow them to resubmit if things change.

The next hearing on the project will be Wednesday, April 8 at 7:00 pm. At that time, Capital Group Properties plans to present engineered plans for the development. The following step is expected to be a peer review.