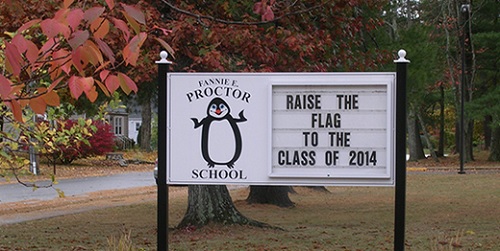 Above: Northborough’s Proctor School was named as the site of workplace discrimination in a lawsuit filed against the Northborough-Southborough school district. (Image from the school’s website)

Last month, I shared a link to a story on a former Northborough teacher suing our school district. (In my rush to sign off for the holidays, I didn’t have time to summarize, just share.)

Northborough Wicked Local ran an update on the story yesterday.

In the suit, she asserts that she was retaliated against after voicing concerns about treatment of special educations students.

Now, an attorney for Northborough and the school district are asking a judge to throw the case out. Northborough officials argue in a letter to the court that the purported harassment was just “everyday workplace tension”.

Among other things, Smith alleges the principal “nitpicked” her, contradicted and interrupted her at meetings and gave her less time than she needed to meet deadlines. Smith’s health was “detrimentally affected” by the “hypercritical treatment” she received, the lawsuit alleges.

Smith, an Ashburnham resident who taught in Northborough for nine years, also claims the school district failed to accommodate a stress disorder she acquired while working as a special education teacher. She is seeking “enhanced and exemplary damages” as well as attorney’s fees, interest and other costs.

The town contends that, while Smith may have faced “minor annoyances” and “personality conflicts” at the Proctor School, the incidents were not “severe or pervasive enough to constitute a hostile work environment.” Rather, the actions Donohoe allegedly took “constitute nothing more than ordinary, everyday workplace tension,” in the town’s view.

Additionally, the town argues Smith should not qualify for special protection against workplace discrimination under state law or the federal Americans with Disabilities Act because she failed to explain how her stress condition limited her daily activities, or why she could not perform different job duties.