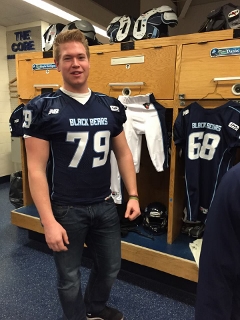 A Southborough football player made the news recently. Trevor Fuce of the Algonquin Tomohawks has been recruited by the University of Maine.

His proud father, Mike Fuce, shared the significance of the news:

ARHS Football has not put a football player in the D1 division for 38 years outside of a kicker in the 90’s.

Trevor was instrumental in leading the team to the playoffs for the first time since 1987 and first time with a winning record since 1997 and first league championship for I believe 25 years. . .

He also chose to stay at ARHS last year instead of going to a Prep school. He was recruited to play at Worcester Academy and Bridgton Academy in Maine. He chose to stay with his school, his team mates and his coaches. It paid off.

Tomorrow, Trevor will sign his National Letter of Intent for the University of Maine Black Bears 2015 class.

Sometimes you just know when a situation is right for you. That’s what happened to Algonquin’s Trevor Fuce, as the Tomahawks’ standout lineman knew right away that his football future would be in good hands at the University of Maine.

Fuce verbally committed to the Black Bears on Sunday after making his first official visit to the school. Fuce had planned visits to the University of New Hampshire and the University of Delaware, but said his experience at Maine told him that was the place for him.

“I got to Maine and I just really fit in with the team,” Fuce said. “The coaches are amazing. They have tough kids and a tough football team. I had a lot of fun when I was up there. It was just a great fit for me and I feel like it clicked.”

Fuce said he accepted a partial scholarship from the school and will head into camp as an offensive tackle for a redshirt freshman season. Fuce said he was excited to start focusing on his future.

“I had so many different options and so many different things I had to think about for the next year,” Fuce said. “I wasn’t sure if I was going to do a post-grad program or go straight to college. It feels so good to get it over with for the rest of the year and just focus on getting to work.”

Click here to read the rest of Telegram.com’s article.

Great to hear his hard work is paying off. You should be very proud.

what was the “kickers” name

I believe it was Dave Teggart Jr. (Northborough).

Sorry – forgot to add – I believe Dave attended U. Conn.