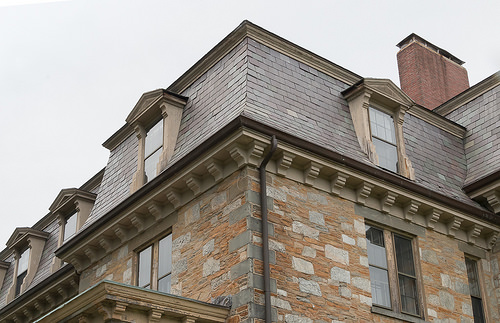 Above: The fate of the historic Stone House is up in the air after a deal with the town fell through. But disappointed residents and committee members still have hopes. (photo by Kate Matison)

The Burnett House deal may have collapsed, but hopes in town of saving the house haven’t. Two organizations were hit hard by Tuesday’s news. But both plan to work with property owner Jon Delli Priscolli to find an alternative way to preserve the historic estate at 84 Main Street.

Southborough Wicked Local covered the efforts of The Friends of The Burnett-Garfield House and the Southborough Historical Committee:

A grassroots group of residents continues its work to save the historic Joseph Burnett house on Main Street.

The Friends of The Burnett-Garfield House was formed in July after protests organized by several Southborough teens helped save the home from being torn down. . .

“We have been disappointed by the news,” said Christa Brady, one of the organizers. The group is now hoping to have a sit down meeting with Delli Priscoli to see how they can help and what options he is willing to entertain. (read more)

While a deal to save the historic Joseph Burnett House on Main Street fell apart this week, many in town are interested in coming up with a new plan to make sure the home isn’t torn down.

Joe Hubley, chairman of the town’s Historical Commission, said the commission was caught off guard at its Tuesday night meeting when Selectman John Rooney broke the news. . .

Hubley said the town will now have to come up with the best solution to possibly save the home.

“It lengthens the process by trying to find a particular buyer,” he said. “The committee is pleased the owner is willing to work with us.” (read more)

I would suggest that the folks that want to save the building put up their own money like the present owner has and then they can preserve the Building. How about that? Otherwise get your nose out of the owners business if he is living by the laws of the land.

Here’s hoping the house can be preserved in one way or another– good to hear that the owner is willing to be so forthright with the situation.