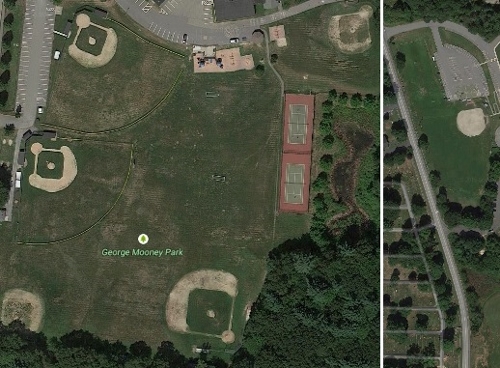 Above: The Recreation Department is seeking approval to finance new lighting at Mooney field (left) for baseball and improved lighting at Choate field for multiple sports. (Images from Google Maps)

The Recreation Department informed selectmen that town fields are “tapped out” for youth sports. The department head asked for relief that would allow her to make more use of the fields the town has.

This week the Board of Selectmen heard a preliminary proposal to finance improved lighting for town sports, especially baseball. To put their plan in motion, the Recreation Commission has several hurdles to get through. That includes approval of the BOS, Planning Board, Fire Chief, and Town Meeting voters.

Tuesday night was the beginning of talks with selectmen with many questions still left to be answered. (Another step is the Recreation Commission meeting tonight. There, members hope to discuss Mooney Field lighting plans with property abutters.)

Recreation Department Head Doreen Ferguson told the board that motivation for the lighting isn’t about hosting baseball tournaments. She told the board that facilities and fields are stretched to maximum use. And sometimes she’s had to turn people away.

Between giving volunteer coaches time to get home from work and having to stop games at dark, baseball can only hold one practice or game per field per night. Lighting at Mooney would allow them to add an extra session each evening.

Choate field is located at Woodward School. Ferguson said that at night, one of its soccer fields is unusable where the lighting is too dim.

Ferguson also explained that sports fields have multi uses with some baseball outer-fields also used as soccer fields. Given demand by town sports, the Rec Department hasn’t been able to “rest” a field in at least seven years. Recommended practice is to rest fields every four years.

She said the poor field conditions have also forced the town to close their fields in weather when other towns are able to keep theirs open. That causes more make up games and further strains scheduling.

The Rec Department head also pointed out problems the town is having financing the returfing of 911 field. She said if it falls through, she had no idea where they would fit those 400 hours of playing time.

Chair Bill Boland commented that town leagues playing outside of their traditional seasons is part of the problem.

Selectmen said they want to support Recreation and the goal may be achievable. But they voiced several concerns about the plan. Foremost was the dramatic increase in cost to the town since they last heard about it.

Selectmen learned that vendor prices had doubled since the project was first raised about six years ago. Plan supporters hoped that by combining the project with Choate Field lighting, they could leverage better prices.

As for the league’s support, the organization has been running at a deficit the past couple years. Money was invested in expenses including dugouts and helping to pay for extra landscaping maintenance at the field.

The Rec Department is still working out what other outside funding they could tap into.

The board pressed for more details. They also wanted to see the Commission develop a plan for facilities going forward. Selectman Bonnie Phaneuf wanted the commission to develop a facilities plan. Selectman Paul Cimino pointed out that lighting is going to decrease the rest the lit fields get. And Mark Purple passed on two pages of questions from absent Selectman John Rooney.

My understanding is that CPA funds can be used for outdoor recreation facilities. This would seem to me to be an excellent use of these funds. Far better, in my opinion, that some other uses that have been proposed.