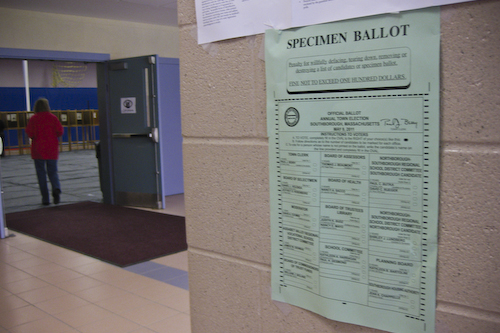 Above: It’s a good time for a preview of what names could be on this year’s election ballot. And a reminder that it’s not too late to add your own. (Photo from past election by Susan Fizgerald)

This month is the deadline to run for office in Southborough’s annual election. If you are interested in tossing your hat in the ring – the deadline for pulling papers is March 20th, and signatures are due soon after. (Click here for more details.)

To help you decide, here’s a preview of who you may be seeing on the ballot this May. As of this morning, only one position in town looks to be contested – Town Clerk.

One of the potential candidates is current Selectman Bill Boland. The BOS Chair has also pulled papers to run for re-election to the board.

According to interim Town Clerk, Michelle Jenkins, Boland can be elected to and hold both positions. Meanwhile, Advisory Committee member Jim Hegarty is already an official candidate. He filed his voter-signed papers for Clerk back in January.

If you are interested in an uncontested seat, the Library Trustees and Board of Commissioners of Trust Funds are a good place to look. And, so far, no one has pulled papers for the Board of Health or Southborough Housing Authority.

Of course pulling papers isn’t the same as filing. One candidate who pulled papers already notified me that she won’t be running (and therefore isn’t listed below).

As of this morning, there are only three official candidates. (And even they have until April 8th to withdraw from the ballot.)

Unless otherwise noted as filed, the potential candidates below have yet to make it official:

Moderator – vote for one – 1 year term

Board of Selectmen – vote for one – 3 year term

Board of Assessors – vote for one – 3 year term

Board of Assessors – vote for one – 1 year term

Board of Trustees – Southborough Library – vote for two – 3 year term*

Planning Board – vote for one – 5 year term

Seats for which no one has pulled papers yet:

*Library Trustee Jane Smith also pulled papers to run for re-election. However, she asked me to inform people that she will not be running.

**Jessie Stein is currently serving on the Planning Board as an interim appointment, therefore not officially listed as a “candidate for re-election”.