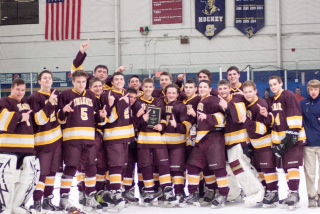 With the exception of Boys Hockey, Algonquin winter sports have come to an end. Here’s an update on how they played out.

[And while I don’t generally cover JV sports, I can share this congratulations shout out. Congratulations to ARHS JV Boys Ice Hockey team. They won their league championship against St. John’s this winter.]

Six members of the Ski team competed in the MIAA Alpine Ski Tournament last week. The team won the 3rd place ranking in the Girls competition. (With only two qualified males racing, the boys didn’t get a team ranking.)

The Algonquin T-Hawks were less joyful about the outcome for Girls Basketball. The team lost its first round of sectionals by one heartbreaking point. A tweet claimed “some extremely controversial officiating in the final moments” of the game vs upper seed Westford Academy.

With just 4.2 seconds left, ARHS senior Emily Carens hit a lay up to tie it up at 38-38. Carens was fouled on the play, and hit one of her shots to give the Tomahawks a 39-38 lead. The Tomahawks were called for a foul themselves as the clock ran down to 0. The Grey Ghosts converted both of their foul shots to claim a 40-39 victory. (Click here for story and pics.)

Another team that didn’t make it past their first division game was Girls Hockey. The team squeaked into its sectionals at 25th seed. They were shutout in the preliminaries by 8th seed Falmouth, 3-0.

Wrestlers competed at state finals over the weekend. But, I got so many details and photos from proud parents, I’ve decided to give them their own post. Look for that tomorrow. [Spoiler: They aren’t moving onto New England, but can be proud of their performance.]

That leaves only one team still vying for a championship this winter. With a bye for the quarter round, Boys Ice Hockey has yet to play in their sectionals.

The third seed team will face off against second seed Shrewsbury on Wednesday. The semi-final match will take place 7:30 pm at NESC. If they prevail, they’ll head to finals next Monday, 8:00 pm at the Wallace Civic Center in Fitchburg.

Congrats to JV Hockey. They led from start to finish against a talented Saint John’s Freshman Team. The rink had plenty of energy as many teams were involved in championship games. If you are looking for a fun family activity in the future be sure to look up the local high school hockey schedules.