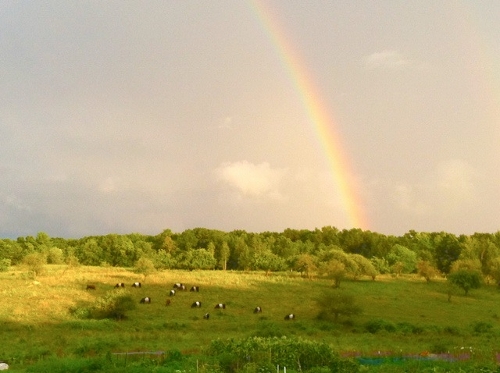 Above: Cows grazing on Breakneck Hill Conservation Land. The grazing rights, wetland concerns, and purported jeopardy of the herd will be discussed at a public meeting next week. (Contributed photo)

According to a public message from the Breakneck Hill Cow Fund, Southborough’s Belties are “in peril.” But the town committee charged with threatening the herd claims there’s a major misunderstanding.

The BHCF call for help claims that a proposal to restrict cow pastures could result in the fund’s inability to maintain a herd. The purported issue is a disagreement between BCHF and Breakneck Hill Conservation Land’s stewards over how to resolve wetland issues.

But the Stewardship Committee refutes the charge that they proposed a plan to limit grazing pastures. According to committee members, this seems to be a misunderstanding by the fund.

As the name of the BHCF suggests, their cows are closely associated with Breakneck Hill. In fact, BCHF once posted that the land is historically linked to cows:

through most of the 18th century the Breakneck Hill area was referred to as the Cow Commons.

But apparently the rights to graze are agreed upon annually. It’s part of a license agreement with the Conservation Commission. As the stewards of the property, the Stewardship Committee weighs in on any issues.

On March 12, the Conservation Commission and Stewardship Committee will hold a joint session to discuss the future license and the location of cow pastures.

According to BCHF’s public statement, after 10 years of grazing on 30 acres of the land, the cows are now threatened with reduced pastures.

Here are the main points from BCHF’s announcement about the upcoming meeting:

The future of Southborough’s Belted Galloway Cows on the Breakneck Hill Conservation Land is in jeopardy. The Stewardship Committee, which is responsible for the management of the land, is proposing a plan to the Southborough Conservation Commission that will make the presence of cows on the land unsustainable. . .

[The proposal] will significantly reduce the amount of land available to pasture the cows, to the point that we can no longer maintain a small herd on the property.

I followed up with BHCF member, Paul Bourdon. He explained:

There has been a wetland issue for some time but the cows had little impact on it and it was thought the benefit of having the cows by the road was worth it.

Stewardship has been pushing to get the cows out of there and so we were working with the USDA conservation service to come up with a plan which we were going to present at the last meeting. The plan was to basically swap the wetlands for the back pastures.

Bourdon summed up that the Stewardship Committee instead proposes to simply eliminate, not replace, wetland pasture. BHCF is asking for public support opposing that plan:

WE NEED YOU! Please attend the Conservation Commission meeting on Thursday, March 12th at 7:30pm at the Town Hall to show your support of our plan and to keep the cows in Southborough or email the Conservation Administrator, Beth Rosenblum at: brosenblum@southboroughma.com. (You can read the full BCHF statement here.)

But Stewardship Committee Chair Jim Gorss informed me that the commitee doesn’t have any “plan”. Instead, the committee shared concerns about cows on the wetlands. Their proposal was to:

work with the Cow Fund and Conservation Commission to come up with a mutually agreeable plan. (Click thumbnail for full text.)

Gorss says that concerns about wetlands stems from a recent revelation that the annual license does not exempt the Cow fund from using the wetlands:

Citizens have asked me why we allow cattle in wetlands, as they destroy the wetlands, and pollute the water.

The Cow Fund told us they thought they were exempt.

Nobody wants to get rid of the cattle, only fix the problem. I’m certain we can come up with a solution.

As for the cows at the center of the storm – I’m sure they’ve been too busy braving the harsh winter to notice.

Here’s a look at how they’ve been weathering the snow. (Photos from Southboroughbelties.org. Click thubmnails to enlarge and for captions from the blog’s posts in January and mid-February.)

Posted after Juno - "Its weather like this, 11 degreesF, -1 wind chill and 3 feet of snow, that makes me think of the immortal words of Thomas Paine: 'These are the times that try men’s souls: The summer soldier and the sunshine patriot will, in this crisis, shrink from the service of his country; but he that stands by it now, deserves the love and thanks of man and woman'."

Post continued - "One of the Southborough revolutionary war soldier’s died of exposure and starvation at Valley Forge so how bad can this be?"

Posted on 2/17 - "Cows were dealing with another snow storm. Measured about 42 inches on the ground. Never seen that before."

We’re all pretty excited this was just a misunderstanding. We thought the “Breakneck Hill Conservation Land 2015 Land Management Plan – Stewardship Committee” that came with the Conservation Commissioner’s March 12th meeting packet was a real plan.