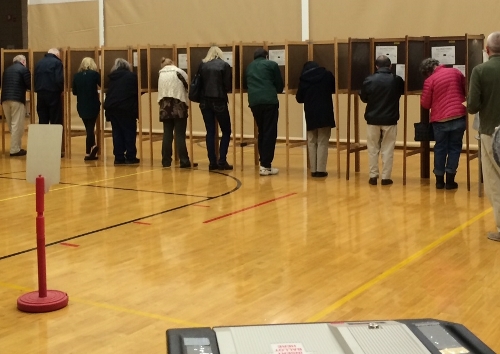 Above: Perhaps some good competition for town office will help with voter turnout. (Photo from past election by Beth Melo)

As announced by her letter to the Editor this week, Desiree Aselbekian has joined the race for Board of Selectmen. Both Aselbekian and the current Chair, Bill Boland, have filed their papers to officially run.

Also potentially in the running is Lisa Braccio. (You may be familiar with her for having run troop drives over the years.)

Braccio pulled papers to run, but she told Southborough Wicked Local that she is still just “exploring” the possibility.

Meanwhile, Boland, who also pulled papers for Town Clerk told SWL that he’s making his run for Selectman a priority. He hasn’t made a decision about the other post.

Another candidate has pulled papers for that post, Dorianne Jasinski. And Advisory Board member Jim Hegarty has already filed his papers.

The Southborough Library Board of Trustees may also have a contest brewing. Two seats will be on the ballot. As of this week, three residents have pulled papers.

Not all positions are contested at this point. But fortunately, papers have at least been pulled for all the seats. So, hopefully there won’t be any vacancies this election.

If you’re interested in joining any of the races, the deadline for pulling papers is March 20th. (Click here for more details.)

As I’ve said before, pulling papers isn’t the same as filing. As of this morning, there are only a few official candidates. (And even they have until April 8th to withdraw from the ballot.)

Unless otherwise noted as filed, the potential candidates below have yet to make it official:

Board of Commissioners of Trust Funds – vote for one – 3 year term
John H. Wilson, 4 Middle Road-

*Library Trustee Jane Smith also pulled papers to run for re-election. However, she asked me to inform people that she will not be running.

**Jessie Stein is currently serving on the Planning Board as an interim appointment, therefore not officially listed as a “candidate for re-election”.

Updated (3/12/15 10:38 am): I mistakenly didn’t show Jesse Stein as having filed papers. That makes it 7 candidates who filed as of yesterday afternoon.

Updated (3/12/15 7:25 pm): Big mistake on my part. I confused Lisa Braccio with Lisa Capello on the ZBA. Braccio did not pull papers for a run last year.

Hi Beth – I checked with the town clerk on Tuesday morning and was told my nomination was certified. Do you have different info? I see you don’t show I have status as filed. Thanks, Jesse

That was my error in missing your filed papers date. The information from the Town Clerk as of early yesterday afternoon shows you as one of the 7 candidates who filed papers.

Ok thanks for checking appreciated