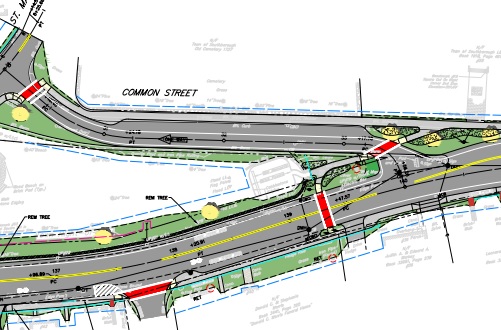 Above: Plans for Main Street include a redesigned entry to Common Street with a bump-out in front of the Library  for safety that reduces parking. (Image from plans posted by the DPW this fall.)

On Wednesday night, MassDOT held a public information meeting on Main Street. Residents learned where the project stands and where it’s headed next. The public was invited to comment. (And still can.)

At past meetings with large turnouts, residents raised many concerns, including impacts to town character, the look, the history, safety, and increases in traffic.

This time around, the audience was comparatively small. And comments revolved mainly about one remaining issue – reduced parking.

Before taking comments, VHB Consultant Brian Brosnan walked residents through changes to the 25% design plans. The changes were based on comments submitted about the plan presented last June.

Jim Hegarty was one of two residents who questioned reduced parking on Common Street. He focused on the bump-out in front of Common Street. That change alone eliminates about three parking spots currently in front of the library.

Brosnan explained that the more discerned turnoff is for safety. It will force drivers to stop and turn rather than “zooming up the hill”. But the engineer couldn’t verify for Hegarty that there had ever been any dangerous incidents in that area.

Former Selectman David Parry again raised concerns about Main Street between Route 85 and Park Street. Parry worried that he and neighbors would have issues with landscape and delivery vans unable to park.

Currently, vehicles park halfway up the asphalt sidewalks on Main Street. Granite curbing would put an end to that.

Lavallee told Parry that there would be shoulders along the road. Parking there would be illegal, but they won’t place any “No Parking” signs. Enforcement would be up to town Police to determine.

The biggest voice of dissent was predicted by Brosnan during his presentation.

Morris Funeral Home owner Donald Morris was agitated over lack of progress on the issue. The property owner asked if he needs to bring in a lawyer.

Morris told MassDOT representative Carrie Lavallee that he’d been working with the town on the issue for years. He referred to communications with selectmen including a November meeting where they voted in his favor. (At that meeting, selectmen agreed that the engineers should attempt to include some parking along the stretch in question.)

Main Street Design Working Group member John Wilson told Morris and the audience that the group would be discussing that issue later that evening. Wilson said the members would be putting together their updated comments to submit.

MassDOT is still accepting public comments on the 25% plan within 10 business days of the March 11th meeting. Click here for the handout with comment form and details.

Parking wasn’t the only issue raised in the meeting. Some were also concerned about plans for replanting of trees. Many of those specifics will be detailed in later plans. Lavallee did share that she is working on increasing the plantings. She hopes to get her agency to fund more tree inclusions than their common practice.

Lavallee also assured the audience that she intends to hold more public meetings than is standard. She hopes to be back in front of residents at a future design phase.

Some of the homes along this stretch of rt. 30 have driveways that are only long enough for one car. With the widening of the road, won’t their driveways be shortened? Who will be responsible for amending the driveways?

If the town owns the land they are using to widen the road the homeowner is responsible or the driveway work. If the homeowner owns the land the town would have to take the land by eminent domain, I would suspect the homeowner would have some legal actions in there favor at that point. The last thing would be the setback distance in the bylaw at the time the house was built, this could also hold some possible ramifications to the issue as well. Today it is 25′ and that would be plenty of room for a driveway.

Thank you for your response, Alan.
I do agee that the intersection of rts. 85 & 30 is in need of a over haul. It is disconcerting to me however that some residents will suffer financial loss. I hope everything works out to everyone’s benefit.

No one should have to suffer s financial loss. If a resident is seeing a financial loss because of the project I would urge them to get involved now. I am sure the town and the state do not want that to happen and by bring the issue to light now there may be something they can do to help. If a driveway will become to short for example, five more feet of pavement added to a private drive is nothing compared to the magnitude of the project as a whole.