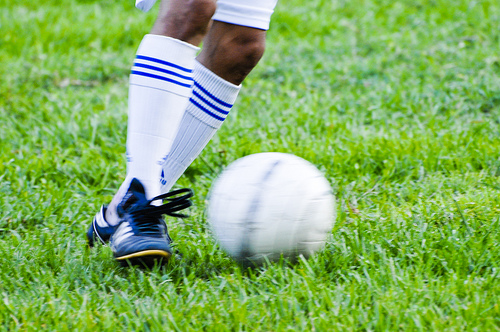 Above: Are you ready for some football? The European kind, that is. (Image posted to Flickr by TheBusyBrain)

The Southborough Football Club is seeking new players to restock their roster.

The seven year old team is flying high from its undefeated season in a regional Over-the-Hill Soccer League. But recent injuries and retirements have reduced the ranks.

Now they’re looking for competitive players. They must be over 40 years old. And preferrably from Southborough.

Here are the full details they shared:

About 7 years ago, a group of in-town soccer coaches and former players got together to form Southborough FC, an Over-40 competitive soccer team that participated in the New England Over-The-Hill Soccer League (OTHSL). The OTHSL is one of the largest amateur sports leagues in the country, and includes teams from the Cape all the way to Southern New Hampshire.  The League has two seasons- Fall and Spring, and teams typically play 10 games against local competition.  Last Fall, Southborough’s team went undefeated in their Division and lost a close playoff game to eventual champ Westwood. This performance earned the team a promotion to Division 5. The team from Southborough is fairly unique, in that the roster is comprised almost entirely of Southborough residents; many other teams draw from a wider pool of players.  According to Ian Fier, the Team Manager and one of its founders, “Our mission is a little bit different than some of the other clubs.  We are competitive, but equally value the friendships we have developed and want to be sure we provide an opportunity to former Southborough players to get some exercise and continue to play a game they love.”

Due to injuries and some retirements, the team is currently looking to restock its roster.  Home games are played on Sunday mornings on the Mill Street grass fields owned by the Fay School. The Spring season runs from Sunday, April 12 through Sunday, June 14 (excluding playoffs).  This season, Southborough will be competing against clubs from Lexington, Westwood, Cambridge, Sudbury and Wayland.  Fees per player typically range from $75 to $100 per season, depending upon the number of participants.  There is also a $25 fee paid to Mass Soccer for an ID card (good for two years), and a one-time uniform purchase of $60 (home and always socks and jerseys plus shorts).

The team is looking for competitive soccer players who can commit to the season and want to be part of the team.  Anyone who is interested can contact Ian Fier (ifier@verizon.net) or Mirek Dlouhy, the team’s Assistant Manager (mdlouhy@yahoo.com).  Some basic information about soccer playing history should be included.