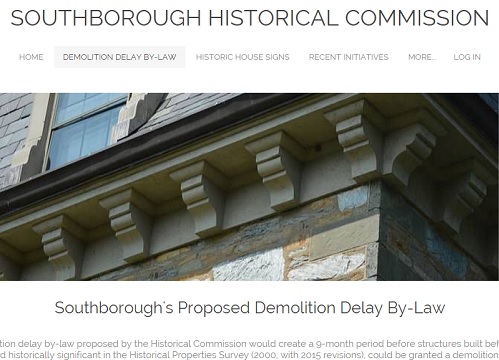 Above: A quick look at the Historical Commission’s website makes it obvious how much of an influence this summer’s events around the Burnett/Garfield House have had on the group’s efforts to bring a demolition delay bylaw back to Town Meeting. (Screenshot of website)

It’s not my role to tell you how to vote on any bylaws. But I want to help readers make their choices based on the facts and not misperceptions.

I have been made aware of an active misinformation campaign against the Demolition Delay Bylaw. (I won’t claim it’s intentionally misleading. Just that some actively spread claims are false.)*

One of the worst misrepresentations I’ve seen is that the commission would prevent people from replacing windows, putting up siding, remove porches, etc.

DEMOLITION – Any act of pulling down, destroying, removing or razing a building or commencing the work of total or substantial exterior destruction with the intent of completing the same.

But, don’t take my word for what the bylaw does.

Before you make your decision of how to vote – take the time to look at the Historical Commission’s FAQs and explanation of the process. If you still have questions/doubts, you can read the full bylaw here.

One item of interest for those of you concerned about buildings that are older than 1925, listed on the historical property survey but not actually worth preserving. For those, the law would likely only delay the demolition by 32 days or less from the date of applying for the permit.

(See the process to understand how that works. Click thumbnail to enlarge.)

If you still have questions or concerns, you can attend the commission’s meeting on Tuesday night to ask them directly. The meeting takes place at 7:00 pm at Cordaville Hall (aka the Senior Center), 9 Cordaville Road.

I understand why this is a controversial article. Some of you are seeking to preserve town history and character. Some of you will absolutely oppose any interference with property owners.

Let’s just give the “undecided” a chance to form opinions based on real pros and cons, not invented ones.

[*Note: Of course, intent is a tricky thing. It’s difficult to know or prove what’s in someone’s mind. (This is the same reason that the Historical Commission has chosen not to use intent in the language about demolition by neglect. Though the purpose for the section is to stop developers from intentionally destroying historical buildings.)

If people spreading blatant falsehoods believe them, then they have not fully read/understood the written bylaws or really listened to what the Historical Commission said at the Board of Selectmen’s meeting this week.

If they think they did – perhaps someone who is afraid of the worst case scenario is unable to see anything else.]

Thanks to the Historical Commission, My Southborough and the caring citizens who have illuminated the facts about the proposed Demolition Delay Bylaw. Here’s a current view of a sunrise on 84 Main. http://images34.fotki.com/v1523/photos/4/1263364/13473839/Sunriseon84MainJanuary252015-vi.jpg

Forgive me for not knowing, but when does voting take place?

The voting takes place at annual town meeting. That opens at 7 PM on Monday, April 13. The vote could take place that night. But if the meeting runs past 11:00 PM, it will likely be continued to the next evening. Whether it will be addressed on the first night or not, will depend on how much discussion and debate takes place over articles prior to it on the warrant.

I should’ve mentioned that the meeting takes place at Trottier middle school in the auditorium.