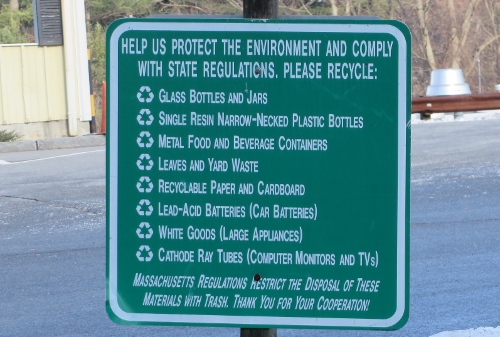 Last night, resident Jack Barron presented his citizen petition article to the Board of Selectmen. The Warrrant Article seeks to allow residents discount access to the recycling area of the Transfer Station.

Most weren’t opposed to the concept. But much of the discussion hinged on whether or not the decision was one Town Meeting voters could make.

According to own counsel, Aldo Cipriano, if the warrant passes it would be advisory only.

Cipriano stated that the regulations are managed by selectmen, not Town Meeting. Chair Bill Boland summed up:

Town Meeting does not dictate the operational aspects of departments.

Barron  suggested that if Town Meeting voters supported the article, he would expect selectmen to follow their will. As for their right to ignore the vote, he rebutted:

I guarantee you if it came up in court with fact finders, they may find a different decision.

Barron pitched his proposal for a $25 access sticker. He reminded the board that he asked them to come up with a solution a year and a half ago.

He has been seeking recycling access for residents who use private trash haulers. Last night, he reminded the board that access will allow more residents to recycle and to support town charities that cash bottle and can returns.

In response to arguments he has heard about monitoring costs, Barron had an operational suggestion. He recommended that the “recycling only” permit access be limited to 4:00 – 6:00 pm on Saturdays. At that point, a sign would be put up, and traffic cones would be used to redirect and restrict access.

Public Works Planning Board Chair Desiree Aselbekian told selectmen her board opposes the bylaw. The board is seeking to go further than Barron. They have recommended eliminating fees to allow full access for all residents. (The cost would be covered by taxes.)

The BOS voted to oppose the article. But the vote was split with varying stances.

Boland opposed taking the decision away from the board.

Selectman John Rooney said his vote was in ongoing opposition to how the Transfer Station is run. He predicted that he will also vote against the Public Works recommendations later in the spring. (Rooney has long pushed for a move to a Pay as You Throw model, which the Public Works Planning Board doesn’t support.)

Selectman Dan Kolenda abstained. He supported the concept but wanted more information on how it could work.

Kolenda urged Barron to sit down with DPW Head Karen Galligan. Barron said he wouldn’t have time prior to Town Meeting.

I would like to invite Mr. Barron to a meeting of the Southborough Green Technology and Recycling Committee at 6:30 PM Thursday night at the Library. We would like the opportunity to discuss this proposed article with him. We encourage consideration of ideas that could possibly improve our waste management policies and reduce the impact trash disposal has on the environment. Thank you Mr. Barron for being an advocate for the environment.

Let’s be clear, this is a law. The Selectmen are required to abide by it unless in impinges on their inherent authorities. If town counsel thinks this is an inherent authority then he should cite chapter and verse.

Greater access to recycling is a no brainer and is really a civic duty. 25 bucks for weekly 2 hour access to a system that is already available and on some level we are told “runs for free” is a very reasonable request, I just don’t see how anyone can be against this.

when is the next hazardous recycling day; usually on a saturday

That’s an annual event that took place in October. There will probably be another next fall. Until then, the town’s hazardous dumping site isn’t in town. It’s in Sutton.

It’s normally open on Tuesday’s and Thursdays. But they did just announce that it will be open on Saturday, May 9th. (It also says you can schedule appointments.)

Perhaps some people don’t realize that the swap shack closes at 5 to give transfer station workers time to clean it out (which really means throwing everything that’s in the shack into the hopper, which is not free).

Totally agree!
…and there isn’t enough staff to keep commercial dumpers from emptying pickup trucks into the hopper, camera’s can’t see license plates, extra sheds adorn the property, and I bet %75 of what goes in the swap shop ends up in the hopper.

It is flawed from one end to the other and will take more than PAYT or a recycling only sticker to solve the problems that matter.

Sounds like it’s time for Harvey to do curbside pickup for the town. They already do recycling! The hopper is a thing of the past, we need to think about alternatives. When will the Public works planning board and DPW head realize this? Tax payers are being asked to pay more and more every year for trash and recycling. Enough is enough.

Don’t misunderstand me I am not a fan of curbside at all. Smelly, messy, noisy trucks screeching around corners at early hours. Safety is a factor as well since many roads have small streets with high school kids walking to bus stops in the dark.
No curbside for Southborough unless we want to take one more step towards becoming Framingham.
Just fix the obvious problems at the dump. Stop making ineffective decisions like installing useless cameras or approving “free” sheds to be built right where a driveway would be installed to a proposed Fire and Police station. Don’t you guys have a master plan?
Put a man at the hopper with a hand camera and fine commercial contractors who sneak in a pickup full of trash. Even better they should pay more just so we can afford a full time person at the hopper. A real efficient operation would move the DPW office up to the hopper so everyone on staff could be on the lookout. Share the job and own the problem.

Except trash stinks and leaks an not everyone wants to haul that in their cars; in response, people and will tend to over- or double- bag their trash just for the car trip.

Plus the volume of true recyclables is much less than trash volume and does not require a weekly or more frequent trip.

The point of the Transfer Station recycle in large part is to be able to donate the proceeds of the mandatory cash deposit to a worthy charity rather than the waste company or the government.

Republic charges roughly $650 per year for both curbside trash and recycling.

Combining the Harvey curbside trash with a $25 Transfer Station recycling sticker would cut Republic’s curbside customers’ cost almost in half.

I want the Transfer station sticker so I can donate the deposits on my many aluminum cans (I drink a lot of seltzer, not beer!) to the charities rather than give them to the waste company.

Moreover, it’s not necessary to go to the Transfer Station every week to keep up with recyclables.

With Harvey curbside so competitive, even compared with the Transfer station, it probably makes sense to make the Transfer Station a PAYT and Recycling Center.

Many say recycling makes little sense except for a few items, like aluminum cans.

Here’s an episode of Penn & Teller’s TV show called “BullS–t” (BS) where they take a critical look at recycling. (Caution: lots of swearing but very funny at times!)

I am wondering how the cost of $25 was determined? Everyone I know recycles and has been for years now. My family of 4 has gotten so into the grove of it that we have only 2 or less white kitchen trash bags per week that go into the hopper. The rest is recyclables. And yet we pay full price to gain access to the Transfer Station. I am not entirely against this idea, but the $25 fee (half of what seniors pay) is an insult to those of us who have been working hard for years to keep our footprint small. And to suggest that 4-6 on a Saturday, peak time, would be an appropriate time to implement this shows to me that the proponents have not thought this through.