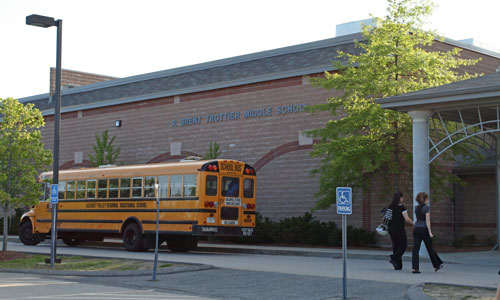 Above: Though bus schedule changes aren’t completely “off the table” they aren’t proposed for next year. (Photo by Susan Fitzgerald)

Last week, the Southborough School Committee had their first discussion about issues related to school start time for Algonquin students. It was a problem that members expressed should be handled at the high school level for now.

Superintendent Christine Johnson gave a brief recap of parents’ concerns and ongoing talks about sleep deprivation in teens. She assured the committee that there is “no current plan” to change the schedule next year.

Right now, the administration is continuing “conversations” at the high school level.

The board appeared resistant to pushing out K-8 start times or investing significant funds to adjust the bus schedule. A couple members allowed that investing some funds isn’t completely “off the table.”

K-8 members agreed that the issue was complicated. But their general view was that high school students spend too much time at night on social media.

As the father of a teen, Jerry Capra told the committee that when he’s “done for the night” at ten o’clock, the high schoolers are still on their cell phones much later. They need to “take personal responsibility”.

Roger Challen said the kids themselves identify technology as one of the reasons they don’t get enough sleep.

Johnson briefly pointed out that lots of research shows that there are real issues with adolescents not being able to get to sleep at a certain hour. “All of these things are factors to the reality of their biological clock.”

The superintendent informed members that she is collaborating with other schools grappling with the issue. Ashland recently shared a video they developed to educate teachers about the issues.

Member Mary Beth Strickland said pushing all the schedule even 15 minutes doesn’t work. Strickland said their committee’s responsibility was to look out for the needs of K-8 families and their work/daycare schedules.

Strickland said that if money was no issue, all schools would start at 8:00. And Johnson stated that it isn’t possible to simply flip the bus schedule for Algonquin and middle or elementary schools “without incurring significant additional costs”.*

It’s complicated. But one thing we can say for certain though is that any additional money spent on busing is a bad educational investment.

Member Roger Challen, challenged the view. Capra clarified any education dollars should be spent on teachers and educational resources. He objected to spending money on buses that would have “to come from something else.”

Challen, who attended the discussion at the Combined school committee meeting, said that quality of education was paramount. He followed:

Sleep deprivation detracts from the quality of education.

[Note: Member Kathleen Harrigan, who also serves on the Regional Committee was absent.]

For the short term, all agreed with Johnson’s plan to focus on fixes that are contained at the high school level.

Johnson told me not to expect anything extensive tonight. Principal Tom Mead will provide an update. But with all the focus on Town Meetings and budgets this month, there won’t be much to report since March.

[Of course, that isn’t a predictor of potential audience sharing on the pilot Johnson proposed last month.]

As for busing – According to Johnson, they have run every scenario they could come up with on flipping around school’s schedules. There was no logistical way to do that with the same number of buses and within the current window of transportation.

Overlapping buses would cost $60,000 per year each.

6-7 Scenarios were run using the school’s transportation software. But Johnson said she welcomes any suggestions or comments the community has. (You can always email her at cjohnson@nsboro.k12.ma.us.)

Johnson also took the opportunity to reiterate that the school is looking at other impacts on sleep deprivation. That includes stress, impact of technoogy, and reducing the impact of overlapping major homework assignments.

I am the parent of a high school student who does try to get to bed at a normal time, even when he isn’t tired enough to fall asleep. There is a real biological issue here – clearly documented in medical literature and research: the biological clock shifts at this age; teens’ bodies want (and need) to sleep on a different schedule than younger children AND exhausted parents. This is not something that can be solved purely by insisting our teens “take personal responsibility” or “put down their devices.” I’m all for responsibility, but there are many responsible teens out there not getting the most out of their education because they flat-out can’t learn at 7:20 in the morning. And there are health and safety implications. We need to address this.

I do sympathize with the argument that we shouldn’t impose on parents of K-8 students. We have three K-8 students and two working parents in our family, so I know that a schedule change is not trivial. But all of my K-8 students are going to BE high school students, and I want to solve this problem for them as much as for my current high school student. This is NOT just an Algonquin issue. There are options. Many other districts have taken a stand, put the kids first, and addressed this problem. We need to do so as well. Change is always disruptive, and thus hard, but we are adults and should be willing to do the hard things for those in our care.

As for the current plan to pilot some fixes at the high school level (a “flexible learning block” for the first 25 minutes of the day)… it’s nice that they are trying something, but this doesn’t solve the presenting problem. This has not gone unnoticed by the teens we know, none of whom seem either impressed, or likely to get anything of substance out of it.