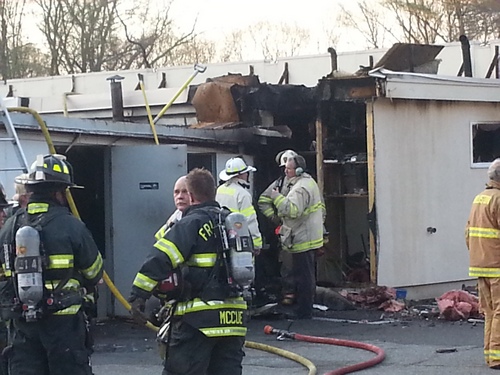 Above: A popular local restaurant was heavily damaged by a fire of unknown origins yesterday. (Photo contributed by Jeff Rudd)

The Hopkinton Italian eatery is just over the Southborough border. In fact, it’s so close to Southborough, the nearest hydrant required to quelch flames was in our town. With water “relayed” across Route 85, the road was shut down at Southville.

The Southborough Fire Department was apparently one of many area crews on hand to help.

According to Hopkinton Wicked Local, the fire started in the men’s restroom. The restaurant was heavily damaged in the rear and will have to close for repairs.

Hopkinton Police tweeted pics from the scene with thanks to SFD and others for their aid. And reader Jeff Rudd shared his photos from the aftermath. (Click thumbnails to enlarge)

The fire started around 5:20 p.m. in the men’s restroom. The restaurant was open for business, but no injuries were reported, Clark said.

Additional firefighters and equipment were eventually brought in from Ashland, Holliston, Hopedale, Framingham, Natick, Upton and Sudbury. Rte. 85 had to be closed in the area causing traffic backups for drivers trying to get into Hopkinton.

“Fire was coming out the rear of the building,” he said. “It extended into void space. (Firefighters) had to cut the roof.”

Firefighters had to run hose from nearby Southborough in a method called a “relay,” Clark said.

“There are no hydrants there so we had to go into Southborough to get a hydrant there,” he said.

Clark said Sudbury covered the station for the first time he can remember in his 40-plus year career. Milford and Westborough crews, ordinarily Hopkinton’s first mutual aid responders, were tied up with brush fires in their towns, he said.