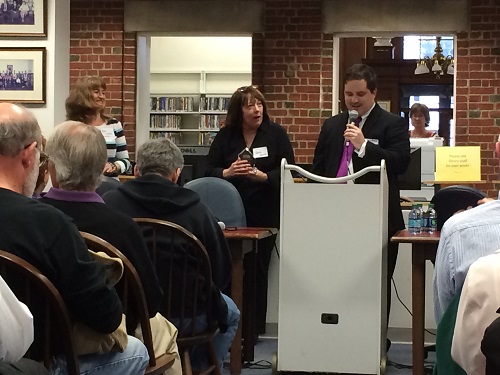 Margaret “Peggy” Tuttle worked at the Southborough Library for over three decades. For many, she was the friendly face at the upstairs checkout desk.

Even after her retirement, she continued to volunteer at and visit the library (bringing her infectious laugh with her.) So, though her death wasn’t unexpected, it was deeply felt.

Last week, the library honored her memory by creating an award in her name. The inaugural honor was granted to retiring Library Trustee, Jane Smith.

Library Director Ryan Donavan surprised Smith with the news at Candidates Night, his one year anniversary at the library. He credited the trustees and especially Smith as instrumental in his success.

Donovan reminded the audience that Smith is stepping down. He praised:

Her steadfast commitment to the library behind the scenes has been inspirational and I believe it is important to honor her beyond a simple thank you.

Donovan then announced the annual Peggy Tuttle Award for Library Service Distinction. He explained that the award will honor

an individual’s long commitment and hard work above and far beyond their expected role be it trustee, library staff member or volunteer.

Smith was clearly surprised and said she was genuinely touched. Smith said she was good friends with Tuttle who she worked with many moons ago:

She was one of my favorite people.