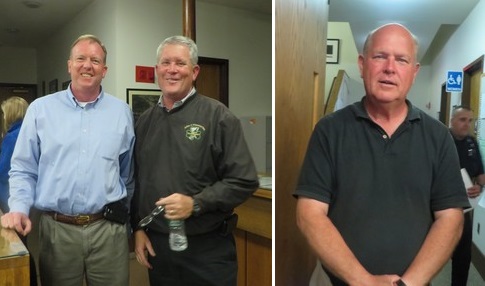 The unofficial election results are in. I would say we’ll have some new faces at Town Hall, but they aren’t that new. It was a good night for two members of the Town’s Advisory Committee: Brian Shea and Jim Hegarty.

1,468 residents turned out to cast their ballots in the annual Town Election – 21% of registered voters.

In the race to replace Town Clerk Paul Berry after 46 years of service, Jim Hegarty captured 72% of the vote against Doriann Jasinski.

In what shouldn’t have been a contest, Dan O’Rourke garnered 61% of the votes for Board of Health. Rose Mauro drew 38% of the votes.

Mauro publicly withdrew from the race (announced at Candidate’s Night and through notices on this blog and the Metrowest Daily News) and never posted signs.

I offer my congratulations this morning to the election winners, but just as importantly to those who ran and, although they did not win, greatly deserve our gratitude for not simply staying on the sidelines. It is incredibly hard work to run an election campaign even in our small Town, not to mention it is no small expense (and on that basis alone the candidates deserved more than a 21% turnout). To Mr. Boland, Ms. Aselbekian and Ms. Jasinski, I commend you for being so service minded as to run and, ironically, I know that you will each continue to serve our Town in one capacity or other going forward, irrespective of yesterday’s results. For that dedication in and of itself we should all be grateful.

And to Mr. Boland especially, regardless of whether one might agree or disagree with his votes or about his leadership of the Board of Selectmen, we should extend our gratitude for 9 years of service in a job that is always time-consuming and too often thankless. I am sure that he must have missed a Selectmen’s meeting at some point along the way in those 9 years, but I cannot recall it. Many thanks, Bill.

I am humbled and extremely grateful for the support of all those who voted for me, put signs in their yard, offered advice, suggestions and criticisms, sent emails and made calls to support me. I want to commend Doriann for the hard work she put into her campaign and the positive campaign she ran. I really enjoyed meeting her family while standing at the polls yesterday.

I congratulate Brian Shea on his election as Selectman. I also want to thank Bill Boland and Desiree Aselbekian for running too.

Over the past many years, it seemed that whenever I have attended a meeting of almost any Town committee or board, Bill Boland was in the room. Thank you Bill for all the time you have given to our Town.

I look forward to working as your Town Clerk and I would appreciate hearing from every citizen with any comment, thought, suggestion or advice you have for me.

Thank you for trusting me to be your Town Clerk!

Congrats to everyone as well. Any idea what the voter turnout was?

“1,468 residents turned out to cast their ballots in the annual Town Election – 21% of registered voters.”

Thank you to the voters of Southborough for honoring me with the distinction of being your next Selectman. I cannot thank enough those that reached out to me to offer their support and their yards for my signs. Thanks as well to all who emailed friends, and posted words of support through social media.

This was my first venture into the political world, and I am most impressed with the positive nature of both contested races. On Election Day, friends and families of all candidates put our preferences behind, stood together, enjoyed conversations, and made sure we all stayed hydrated and sunscreened.

There is not a nicer, more respectful and polite group of young individuals than “Team Jasinski” – Doriann, you should be very proud.

I enjoyed getting to know Desiree better through our frequent meetings at the transfer station these past few weeks. Congratulations on a well-run campaign.

To follow up on Paul Cimino’s comment earlier, while Bill Boland may not have missed a Selectmen meeting during the past 9 years, there are also countless other Board and Committee meetings he has not missed as well. I know firsthand, as I have seen him at most meetings of the Committee’s that I was on. He has served the Town tirelessly in his 9 years as Selectman, and he deserves our thanks for his many years of service to our community. Hold your head high, Bill.

Congratulations to Jim Hegarty on his victory as our next Town Clerk. No one worked harder at this election than Jim, and he deserves credit for setting a new standard on how to run a town election campaign. Thanks for the FBI stories to help pass the time yesterday!

To my new Board members – we all come from different backgrounds and experiences, but we have been brought together as one group by the voters of the Town we all call home. I look forward to working with you as we take on the challenges that lie ahead.

To the Voters of Southborough,

This has been an outstanding two months campaigning for a seat on the Board of Selectmen. I want to thank all of my supporters for their dedication and votes on Election Day. We stayed true to our commitment to promote transparency, open government, accountability, and most importantly a new vision for our Community. We stuck to the issues, and I’m confident the ideas and positions I brought to the discussion will not go unnoticed. The fact that people are using my words, such as “moving Southborough forward” and “vision” means I must have had an impact.

I truly believe my defeat is a victory for Southborough because our Town is desperate for change. Mr. Shea will be a nice addition to the Board, and I congratulate him on his win. It’s my hope the Board of Selectmen will make significant changes to the structure of our government making the Town House more public friendly.

I look forward to working with all of the Selectmen as a member of the Public Works Planning Board. There are many DPW issues that I hope the PWPB will be able to advise Selectmen on moving forward. Additionally, I plan on staying very active in Town politics in general. I think I may develop my website into a local political blog. Stay tuned and check out http://DesireeForSouthborough.com for updates.

Again, I thank all those who supported my candidacy, and I wish Brian the best of luck in his term on the Board of Selectmen. I’m sure we’ll be talking soon.

As always, I’m for moving Southborough forward. I know you are too!