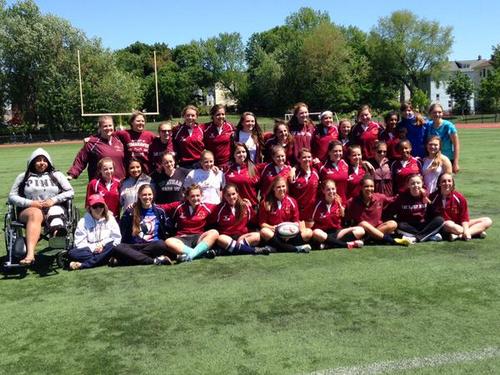 Above: ARHS Girls Rugby kicked off the school’s post season with another state championship win (Photo tweeted by @ARHSAthletics)

Algonquin athletics and other area athletes are flying high as spring sports kick off the post season.

ARHS varsity teams all boast winning records this spring. Several of the teams begin their post season championship bids this week. Three of them earned a bye in the first rounds to play in the Quarter Finals. Two head to states this weekend. And one team has already snagged a state championship.

Memorial Day weekend, Girls Rugby earned its 5th state title in a row. The Telegram & Gazette covered the team’s 43-0 win and the story of the five year old team’s “established program in an up-and-coming scholastic sport.” Click here for the article.

And Assabet is boasting about the success of one of their teams. Aztecs Boys Lacrosse won the vocational state championships. This season also marked their coach’s 100th winning game. (Click thumbnail to enlarge team photo.)

Back to Algonquin sports –

Boys Volleyball earned a bye in their first rounds. The first seed team will challenge 9th seed Framingham in the Quarter Finals on Tuesday. The T-Hawks lost to the Flyers in their second game of the season. But they haven’t lost another game since, including their Framingham rematch.

Both Boys and Girls Lacrosse enter their district tournaments at third seed this week. In the first round, 14th seed South Hadley will face the Boys at the T-Hawk’s stadium tomorrow. Girls Lacrosse will bypass their first round to play in the Quarter Finals.

Boys Baseball’s bracket starts with the Quarter Finals next Monday. The second seed team enters the tournament with a 14-6 record, the same as both first and third seed competitors Shrewsbury and Nashoba. They’ll be playing 7th seed Westborough, a team they’ve already bested twice this season.

Fourth seed Girls Softball will play in their Quarter Finals this Friday, bypassing the first round.

This weekend, Outdoor Track will head to Fitchburg State for their state tournaments.

Here’s the schedule to date. (I’ll try to share an update mid-week when more details are available):