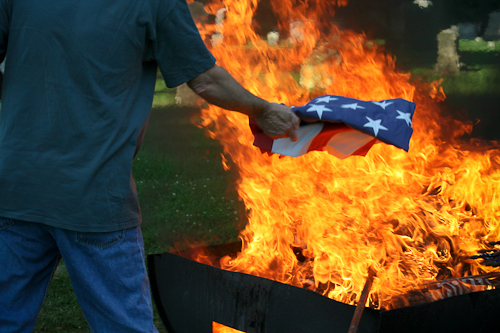 Above: An American flag is placed on the fire at the annual flag retirement ceremony

Every year on or about Flag Day, Veterans of VFW Post 3276 and Legion Post 161 hold a flag retirement ceremony. During the ceremony, worn flags collected from residents, as well as ones from the cemetery that were replaced this past Memorial Day, will be retired by ritual burning.

The ceremony this year will be held this Sunday evening at the DPW. American Legion Commander Steve Whynot announced:

Members of the VFW 3276 and Legion 161 – will be conducting a Flag Retirement Ceremony  to destroy by ceremonial burning – old, faded, torn and unserviceable American Flags.

Residents who have flags they would like to have included, can leave them at the respective container located near the Control Booth at the Transfer Station or drop them off at the Police Station.