Above: A public forum this month was meant to present both Common Core advocates and opponents. That balance is yet to be determined. (Images from Common Core and Common Core Forum websites)

Last month, an audience member at the Regional School Committee invited committee members and the public to a public forum on the Common Core. It was pitched as a pro-con forum on the issue.

So far, it’s looking like a one sided debate. The two confirmed presenters are both vocal opponents of the Core.

Event organizers have tried reaching out to Core advocates, but so far without success. If you are one or know one, you can contact the organizers at jcomara@gmail.com.

The organizers’ challenge may result from the fact that the forum is linked to strong opponents of the Core.

The event is sponsored by Common Core Forum, a group that describes itself as:

The group has had traction in Northborough, which is where the forum will be held. It’s scheduled for Saturday, June 20th, 10:30 am – noon at Northborough Free Library, 34 Main Street.

(And if I learn that they succeed in booking presenters for the other side of the debate, I’ll let you know.)

The difficulty for a partisan group to put together a non-partisan event may be why concerned residents had asked the school committee to put on and attend a pro-con forum. As I shared previously, a response on that request was put off at the last meeting. And it’s uncertain if it will be on the agenda for the June meeting.

Today, an organizer shared the following announcement on the reason for the forum – and frustration over treatment at the May meeting:

Frustrated residents of Northborough and Southborough have taken the initiative and scheduled a Common Core discussion because their school administration reneged on their promise.

Since the beginning of the school year, parents and concerned citizens have been asking district school committees to fulfill their responsibility as policy-makers and become knowledgeable on the increasingly controversial issue of Common Core, and its potential impact on student achievement.

The need for an educational forum was evidenced by school committee members publically stating that they were not knowledgeable on this transformational issue. Although the administration assured concerned citizens that a pro/con discussion would be held, it didn’t happen.

To gain attention, a Petition was created requesting policy-makers to attend an educational forum designed for their benefit. Over a single weekend, 412 signatures were gathered. The Petition was presented to the Northborough-Southborough Regional School Committee on May 20th. The uncooperative response fueled the presenters’ frustration. As MySouthborough.com’s next day’s headline reported, “Parents petition Regional Committee for Common Core pro/con forum; discussion stifled”. Significantly, over 40 “Comments” were posted including, “School committee members are elected, are they not? Perhaps if the current members are not willing to work cooperatively and collaboratively with parents and other concerned citizens, we need to elect new ones.” 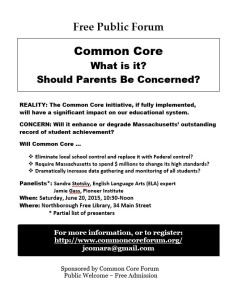 On their own initiative, citizens scheduled an event in cooperation with Common Core Forum www.commoncoreforum.org It will be held on Saturday, June 20th, ​10:30 am to Noon, Northborough Free Library, 34 Main Street. Speakers include Sandra Stotsky, English Language Arts expert and Jamie Gass, Pioneer Institute. The free public service program is open to all, including the press.

For further details, or to register, click here or email jcomara@gmail.com.

Wow – thank you to the parents who are orchestrating this effort to open a dialogue about common core and make sure that our school committee members are knowledgeable! I missed the articles about this in May. You can count me as a parent who’s VERY critical of common core and would love to see a change.

0
Parent of a middle schooler

A question: The schools are already teaching CC every day now. We just don’t have the CC tests (i.e., PARCC). Are we really talking about the teaching or the test? Any insights?

0
Parent of a middle schooler

and one more question: Does any one know how soon we will find out whether our kids will be taking MCAS or PARCC? Thank you!

0
PML
Reply to  Parent of a middle schooler

From the DESE website:
“The state Board of Elementary and Secondary Education will decide in fall 2015 whether to adopt PARCC and transition away from MCAS English language arts and math tests, and this spring’s administration of PARCC and MCAS will help inform that decision.”

Science and Technology Engineering will still be assessed as it is now by the MCAS test which happens in grades 3, 5, and 8 (I believe). It’s not done in every grade.

Please check out 10 things parents should know about PARCC: http://www.doe.mass.edu/parcc/10Things.html

Hello, CC is already implemented and in operational mode at all the schools. You could and should ask some of the (CC huge backer) unionized teachers and non union administration ie principals to attend. I think the majority of parents are very ignorant to what their children are being taught and worse yet what they are not being taught. There is no real American history (based on all the wonderful Judeo Christian contributions in America and around the world the past 500 years – please dont forget ladies that it was Christ that gave slaves and females equal status with all) and the European history is severely tainted with anti white male agenda. It is extremely pro anything but the true Judeo Christian historicity of our country and for that matter the civilized world becasue of those contributions. And this bias which has been encroaching since the drug induced street freak hippies of the 60’s took the Bible out of school, made legal the killing of innocent children in the womb, emasculated men through feminism that I believe has actually hurt women, is not called Common and Common Core and in the classrooms of Southboro and Northboro. Don’t believe me, I’m the freak? Check it out for yourself and pay attention. Both liberals and conservatives have some good ideas, and there is common ground, but the radicals have seized all the common sense ground and turned it into Common Core.

I meant to say “now called Common and COmmon Core”, instead of the
“not”.

Hmmm…Mike… Not sure where you are getting your ideas from. Considering that Common Core is only English Language Arts/ Literacy and Mathematics at this point. Social studies (history) is only mentioned within the context of ELA so that reading and writing skills are practiced across the curriculum. It does not detail which history should be taught. Please read the standards from an official source before judging if it is something kids should be taught:

Mike, I for one would love to hear a more detailed analysis of Common Core standards from you. I’m not sure how to respond to the rest of your comment, to be honest. I’ve seen all of these same points being made by well-known conservative pundits, and I’d be interested to learn more about how you personally would like our society to look.

Gee Mike- doesn’t doesnt to me like you’re having a good day. Emasculated men? Legalized killing of innocent children in the womb? Shaves snd women given equal status by Christ? Wow.

Opinion page of WSJ has an op ed on this written by a special needs teacher in NY. Should be read by all. Sorry I cannot link since is subscription based.

0
Parent of a middle schooler
Reply to  Frank Crowell

Here is the article:
Common Core Is Leaving My Students Behind
By BRIAN ZORN
June 15, 2015 7:21 p.m. ET
The mission of American education is “No Child Left Behind.” For me as a special-education teacher in New York state, that means making my students feel worthwhile and giving them the confidence they need to succeed—academically and socially. Yet New York’s statewide English language arts (ELA) and mathematics exams unduly humiliate children in special education and frustrate the teachers who want them to succeed.

The tests, administered to third- through eighth-graders over six days each spring, evaluate students on uniform Common Core State Standards that have been adopted by most states and emphasize critical thinking. As this newspaper reported in 2013, the first year the tests were administered, many children in New York state “ran out of time, collapsed in tears or froze up.”

The unhappy result has been more students opting out of the tests altogether. According to the New York State Education Department, in 2014 49,000 and 67,000 students in the state skipped the ELA and math tests, respectively. And those figures are expected to climb this year.

If average and above students are struggling, imagine what it must be like for my students—children with severe dyslexia, ADHD, Asperger’s syndrome and other learning disabilities. These exams undermine my students’ hard-won confidence and tell them they can’t compete. What does the state learn from my students’ exam results? I can only think of one thing. It proves that they are not academically on grade level. But isn’t that the main reason they are in special-education classes in the first place?

Under the federal Individuals with Disabilities Act, all students who receive special-educational services are entitled to a “free and appropriate” education. That education must be individualized and designed to meet the child’s unique needs. It is not appropriate to provide reading instruction that is three years above a special-education student’s grade level. Nor is it fair to ask a sixth-grade child with a learning disability who is struggling with basic math to take a test that includes evaluating algebraic expressions as well as other complex concepts.

On average, my class of nine students is reading more than 21/2 years below grade level. Some have average intelligence, but they struggle to learn in the ways others do.

One of my fifth-grade students spent his early school years frustrated and angry that he couldn’t read like everyone else. He felt defeated and disliked school. Yet with great patience and encouragement from his teachers, he can now read more than 200 words by sight and has begun to “crack the code,” applying phonemic awareness to unknown words to sound them out. His self-esteem has increased markedly and he has, for the first time, begun to enjoy reading.

Then came the statewide exams, and six horrific days in my classroom. On the first day, he laid his head down on the desk as tears rolled down his face. He couldn’t understand a single question in the ELA test, let alone entire passages. The test is written on a fifth-grade level; he is reading on a first-grade level.

Exam evaluators certainly won’t see the progress that he has made this year, jumping from reading a handful of words to hundreds. Nor will they see the recent joy on his mother’s face the day I asked him to read for her at our parent-teacher conference.

A much better approach—and one that gives teachers results that can be used to measure yearly growth and mastery, as well as determine future instruction—would be a test like the Northwest Evaluation Association’s Measures of Academic Progress (MAP). This computerized test is designed to increase or decrease in difficulty until the student gets a certain number of questions correct. This helps to determine his or her mastery and instructional levels. Additionally, this exam is able to take into account a student’s individual reading and mathematics level. The state English and math tests don’t—and are leaving special-education students behind.

Mr. Zorn is a special-education teacher in the Mineola Union Free School District in Mineola, N.Y.