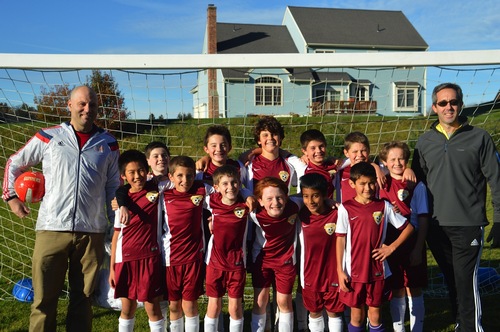 When I posted news on baseball champs, I knew soccer wouldn’t be far behind. An email confirmed some impressive news I’d heard through the grapevine.

It turns out that Southborough Youth Soccer’s 10-11 year old boys have a bit to brag about. The Southborough Galaxy team has made it to the President Cup finals for their age group.

Apparently, it’s an accomplishment that no one can recall having been earned in past years for boys. And if they win the cup, they’ll be the first Southborough team for either gender.*

The league’s Presidents cup is a division tournament for ages 10-11 in the spring. According to a parent, the entire division plays knockout games to make it to the finals. Southborough Galaxy won First Round, Quarter-Finals, and their Semi-Finals against Wellesley, Jamaica Plain and Newton.

The championship game is tomorrow, Saturday June 20 at 8:30 am. They’ll be competing with Arlington Aces for the big win.

If you’d like to cheer them on to victory, they’ll be playing in Medfield at Wheelock School.

(If you’d like to see a bigger version of the above picture, click the right thumbnail to enlarge.)

[*Note: This “fact”, is true so far as anyone involved can remember. Since youth soccer’s use of the internet doesn’t date back to the 70s, it’s nothing we can google to verify!]