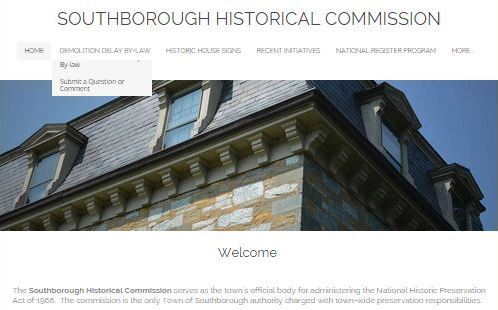 The Board of Selectmen is looking for volunteers to fill 27 vacancies remaining on committees. Openings with 1 to 5 year terms include positions on the Zoning Board of Appeals, Historical Commission, and Open Space Preservation Commission. (Click here for the list and application form.)

At least two applicants have put their hats in for the one opening on the ZBA. The BOS plans to interview those applicants at their next meeting.

Last week, selectmen voted on reappointments for expiring positions on town boards and committees. The discussion led to a debate about putting members of one committee in the hot seat.

The board was provided a list of all town committee members looking to re-up their terms. In response to a motion to approve reappointments, Selectmen Dan Kolenda asked the board to put a hold on the Historical Commission.

Pointing to their Demolition Delay Bylaw adopted at last Town Meeting, Kolenda said out that the commission is  an “incredibly powerful committee”. He urged promoting the openings to recruit a “larger pool of candidates from which to choose”.

Referring to controversy over how the bylaw vote was communicated, Kolenda said:

I would love to hear from [other interested candidates] and then compare them with those that are currently on and hear. . . how they have operated during their current term . . .maybe they could also answer questions as to some of the challenges associated with annual town meeting and how that went and then be able to answer to the public . . .

It would offer [us] the opportunity to say ” You know what, we’re not going to reappoint you based on. . . how things went” or “Great work, you have this board’s full support to continue what you’re doing.”

Selectwoman Bonnie Phaneuf pointed out that the commission has a vacancy. (It’s a vacancy that has existed all year on a committee that has gone for years without a full roster.) And she backed the commission saying:

Town Meeting approved the bylaw. So the individuals who attended Town Meeting must have faith in the committee.

She also sought to clear up any perception of wrongdoing by members:

Some of the confusion around town meeting happened because of my information to the historical commission and my understanding of it requiring a 2/3 vote. I don’t think that’s a reflection of the committee. I think it’s a reflection of our operation as a community and our communication between other committees.

Having participated in the Hisorical Commission meetings with her, Chair John Rooney volunteered, “It is not your doing singularly.”

Selectman Brian Shea said that he was more concerned about the ZBA reappointments. He wondered if with two applicants for one vacancy, the members seeking reappointment should also be interviewed.

With one member of Open Space not having yet submitted reappointment papers, a motion was considered for holding on reappointments to Historical, ZBA and Open Space. In the end, the motion wasn’t seconded.

Rooney didn’t support Kolenda’s changing the reappointment process. He stated that getting volunteers can be difficult and that even when he doesn’t agree with every committee or members’ position, he’s “still am grateful for their commitment.”

Shea was concerned that the Historical commission has historically been “hamstrung” by quorum issues. He didn’t want to see that continue to happen.

He reminded the board that earlier that evening they asked the Public Safety Committee to discuss the future of the Police Station building with Historical. Shea was also worried the impact with the Demolition Delay Bylaw going into place.

In the end, all but Kolenda voted to approve the full slate of volunteers seeking reappointment, Historical Commision members included.

Beth,
The Selectwoman you referred to in this article is Bonnie Phaneuf, not Dorothy.

Thank you. It was a typo on my part that I didn’t catch.

I do know that her name is Bonnie. It’s the second time I’ve written her first name wrong in a post, so I feel doubly bad!