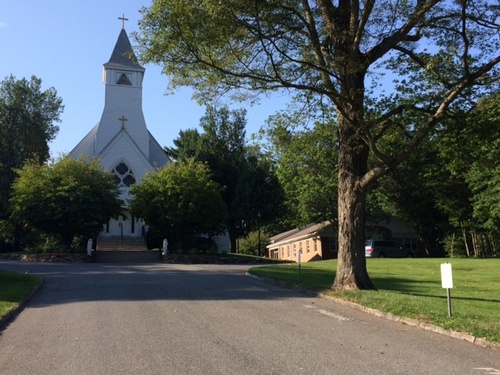 Above: After two dousings (the final one by Southborough Fire Department) all traces of a hate-filled message have been washed away. But for church staff, the memory will linger. (Photo by Beth Melo)

The Southborough Police Department is investigating a hate crime at St. Anne’s Church. According to Chief Kenneth Paulhus, derogatory “graffiti” was “directed at persons of a certain sexual orientation, racial, religious and political groups”.

The message was discovered on the driveway at 8:30 am Tuesday morning. Responding to the complaint, police canvassed the area. St. Anne’s and other religious and government properties will receive extra patrols.

They are now asking anyone who has information or saw something suspicious to contact the station at (508) 485-2121. (Callers may choose to be anonymous.)

Thankfully, the message was in chalk, allowing church staff to wash away the words.

And yet, according to Southborough Wicked Local, Father Conrad Pecevich of the church was disappointed that the hateful words were washed away yesterday morning:

He said he planned to the leave the markings for the time being . . .

“I wanted people to see that hate crimes are right here at home. They aren’t necessarily in other towns and cities only. Prejudice is all around and we have to fight it.”

The SWL story provides more details on the hate message:

The graffiti proclaimed, “All lives matter except … ,” before listing a number of racial and sexual slurs.

Not meaning to sound stupid, but is there anyway to find out what exactly was written? I actually took the writing a different way, although I admit I don’t know exactly what was written. Is this really a hate crime or is it possibly a statement about the Catholic Church? I am not defending what was done in any way shape or form. I am just trying to understand the motivation.

You can look at photos on Southborough Wicked Local. I’m not going to write them here. But it said that all lives matter except, followed by hateful slurs.

I personally can’t see it as being interpreted the way you are taking it. (I think that you mean they are accusing the church of being the haters.)

The police should give equal consideration to the possibility this was a hoax.

Not accusing Father Pecevitch by any means, but I suspect there are more people out there who might act on the following belief to prove their point, rather than harbor the actual hatred being decried by the following sentiment.

“I wanted people to see that hate crimes are right here at home. They aren’t necessarily in other towns and cities only. Prejudice is all around and we have to fight it.”

There is a whole generation of students being indoctrinated right now in the belief that hate permeates American society, and who are shown no reason why they shouldn’t prove the point, even if it means faking it.

A hoax? A joke?
Living in the St.Anne neighborhood, I can assure you that there is nothing trivial or funny about someone silently creeping around in the middle of the night, unseen, defacing private property.

This crime should not be too hard to solve as from what I gather as the “perps” used sidewalk chock! Perhaps drive around the neighborhoods and see how many driveways have some form children’s chock drawings in them?

If someone was intent on delivering a strong message of hate, I would be willing to bet that a more permanent medium would have been used.

It was a strong message and very upsetting to our happily mixed neighborhood.