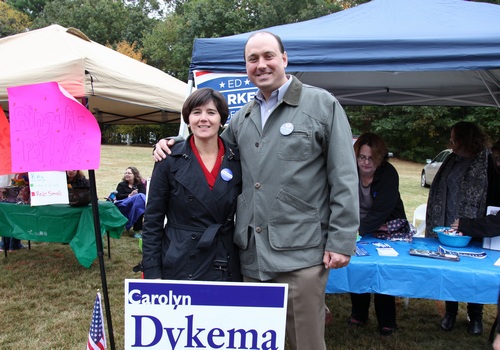 Above: Representative Carolyn Dykema and Senator Jamie Elderidge will be part of a forum to answer Southborough constituents’ questions. (Contributed photo from Heritage Day last fall)

The Southborough Library is hosting an “open forum” later this month. It’s an opportunity to speak with politicians who represent our town in the state and federal government.

Our state legislators will attend along with a constituent representative for our U.S. Congresswoman. It’s a chance to hear what they’re working on and ask questions. 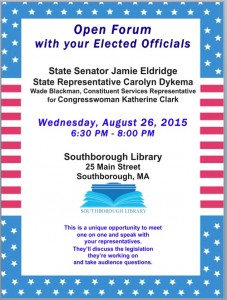 This is a unique opportunity to meet one on one and talk with your representatives. They’ll discuss the legislation they’re working on and there will be time for audience questions.

Representative Carolyn Dykema was elected to the Massachusetts House of Representatives in 2008, She represents the towns of Southborough, Holliston, Hopkinton, and precinct 2 of Westborough. Prior to entering the legislature, Representative Dykema worked professionally in the fields of financial services and environmental consulting.

Carolyn is a member of the following House Joint Committee’s: Ways and Means; Environment, Natural Resources and Agriculture; Children, Families and Persons with Disabilities; and Housing.

Wade Blackman works in the MetroWest Framingham Office of Congresswoman Katherine Clark. Clark was elected in 2013 to represent the Fifth District of Massachusetts, covering 24 cities and towns, from Winthrop to Southborough.

In Congress, Katherine Clark brings her experience as a Massachusetts state senator, state representative, general counsel for the Massachusetts Office of Child Care Services, and policy chief for the state attorney general.

She has advocated for ending wage discrimination, protecting women’s health care, access to affordable, high-quality childcare, paid family leave, safer schools, and other reforms to address the challenges that families face. Recently, Clark has introduced legislation to improve the quality of child care, combat online threats and harassment, help newborns that are exposed to drugs in utero and prevent opiate abuse during pregnancy.

Please come if you can.

Sorry I will not be around for this scintillating event – maybe someone who goes can ask some good questions……………..to make it a least a little interesting.

Will any of them support a tax cut that puts real dollars into middle class families hands? Not hand outs, not a subsidy and not a tax form right off – a real cut. Or maybe a better question would be, have any of them run across a tax hike they did not like?