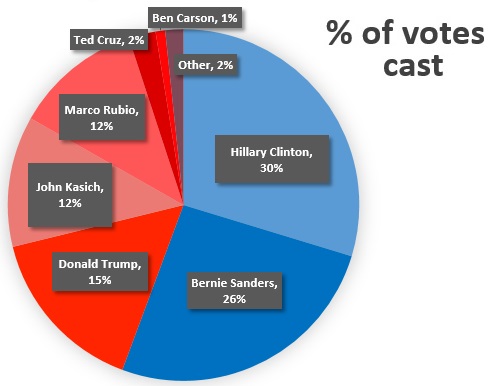 Above: Democrats grabbed the most votes in Southborough with the majority going to Hillary Clinton.

Just over 50% of registered voters in Southborough turned up at the polls yesterday. That includes a good showing by unenrolled voters.

Here’s how the stats broke down.

Southborough fell in line with the state by ranking of winners. But by share of votes, there were significant differences.

In the Republican race, Donald Trump’s also decisive win was less of a landslide.

On the Republican ballot, he won 35% of the vote and runners up John Kasich and Marco Rubio took 28% and 27%.

For a better look at the town votes by ballot, click the pie charts to enlarge.

56% of Southborough voters took part in the Democratic primary vs 44% for the Republican ballot.

*At this point, there’s no data to accurately say which ballots unenrolled voters chose. The Town didn’t share how many voters checked in by party.

If 100% of each registered party voted, it would mean that at least 18% of unenrolled voters showed up.

Updated (3/2/16 3:03 pm) With talk of potentially record turnouts in our state, I was curious where we stood vs the last big primary. We’re up by 26 voters from 2008. But there was actually an 8% decline in % of registered voters who turned up.

The “Trump effect” didn’t draw unusual numbers for the Republican ticket in town. At least, not compared to the effect of having a former Governor on the ’08 ballot.

The Republican ballot drew only 22% of registered voters, down 12 points from ’08. And the ’08 front-runners each captured more Southborough votes than Trump did this year (Mitt Romney by 23 points and John McCain by 10 points).

Meanwhile, Hillary’s % of registered voters was only down 1 point from 2008 when she beat President Obama by a hair.

There were also votes for state –man and state –woman as well as Southborough Advisory Board. Where do we find those results?

Sorry, I mistakenly thought all of the other positions were uncontested. But it looks like two seats weren’t – Republican State Committee Man and Woman.

Brian Burke lost Southborough’s vote to Paul Ferro but won the seat for the Middlesex & Worcester district. Jeanne Kangas beat Ann Barndt in both Southborough and the district.

As for the Advisory Board – that wasn’t on the ballot. Those positions are appointed.

What you saw on the ballot was the political party’s “Town Committee”. On each ballot, there were more names listed than seats allowed. So they all “won”.

While I’m at it, I can tell you that no Southborough resident voted in the Green-Rainbow Party primary. And one Southborough voter used the Independent Ballot to vote “No Preference”.

(The state’s Democratic party doesn’t appear to have updated their website with Tuesday’s results. Neither has the state.)