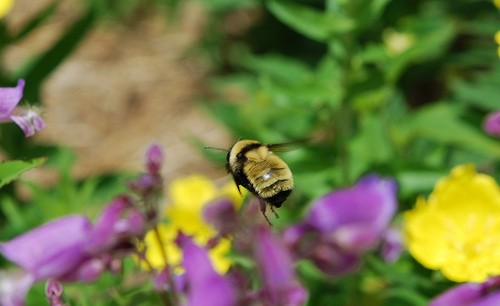 Above: Residents learned how to protect our town’s population of bees, like this almost-extripated from Massachusetts bombus fervidus. (Photo posted to flickr by jbaker5)

The Open Space Preservation Commission and the Stewardship Committee have been working to sustain pollinators in Southborough. The groups co-sponsored two recent talks at the library related to the issue. (Scroll down for the videos.)

At each presentation,attendees learned that gardeners trying to help pollinators could accidentally be helping to kill them.

Speakers at both talks reminded residents, “One bite of every food we take is generated by a pollinator.” Experts addressed concern about bee decline and colony collapse and the effects on the environment. They spoke about pollinator gardens, butterflies, bees and other important pollinators. And they pitched what residents can do to help.

In late April, the designer of Breakneck Hill’s in-progress Pollinator Garden spoke. Ellen Sousa explained the importance of native plants for native species. While her focus was butterflies, she gave an overview of other key pollinators. Most importantly, she explained that gardeners can unknowingly buy plants (even native ones) that are toxic to bees.

Sousa said that some plant sellers’ protect nurseries with neonicotinoid pesticides that cause plants to become toxic to bees. She encouraged buyers to ask questions about neonics and pesticides before purchasing plants.

Under current laws, sellers don’t have to post use of the “neonics”. In the subsequent talk in May, Representative Carolyn Dykema spoke about how she is seeking to change that in Massachusetts. (Scroll down for more on that.) She explained that overexposure to neonics weakens bees, making them much more susceptible to death by other causes.

At the May talk, another expert working at Breakneck Hill addressed residents. Professor Robert Gegear has been researching the interrelationships between pollinators and the plants they feed on. In surveying bees on the hill last spring, he discovered species previously thought to be wiped out from our state. The findings prompted a further survey with volunteer help. He shared his results with the audience.

Dr. Gegear explained that just because bee flies around flowers doesn’t mean they are finding what they need. One species he studied at the hill last year had no signs of pollen on their legs. His reasearch is trying to better learn what diversity of plants is needed to help native bee populations.

Right now, the research is continuing, and they are recruiting volunteers for this season. He also encouraged attendees to send him pictures of bees they find in their own yards.

As for what you can do in your own yard –

Presenters didn’t provide a list of safe vendors, though Sousa mentioned one in Framingham and Rep. Dykema indicated Lowe’s is starting to label their plants. But, I’d be remiss if I didn’t point out that I believe we have a “safe” vendor in town. Gulbankian’s Facebook page posts indicate they do not use pesticides.

For finding native plants that are likely to make for happy pollinators, I found a great database to check out here, and a printable list here.

Now, here are videos of the talks by Southborough Access Media:

Pollinator Gardens with Ellen Sousa at the Southborough Library April 26, 2016

Breakneck Hill Bumblebees with Dr. Robert Gegear at the Southborough Library May 10, 2016

Now, as promised, more information on the state bill Rep. Dykema is sponsoring. In addition to labeling treated plants, the bill seeks to restrict the use of the harmful pesticides. Dykema addressed the importance of the bill at the May presentation.

Her office shared the following summary of the bill and testimony:

H.4187 (initially H.655), An Act protecting Massachusetts pollinators, looks to protect bee health in Massachusetts by restricting the use of neonicotinoid pesticides, a commonly used class of chemicals that several peer-reviewed studies and the Environmental Protection Agency have said are harmful to bees. This legislation has broad bipartisan support and was voted unanimously out of the Environment Committee in March. At the bees hearing, many Massachusetts beekeepers shared personal stories of hive loss while testifying in support of the bill, and Attorney General Maura Healey’s office has also submitted testimony in support of our bill. Similar bills have been passed in the Maryland and Connecticut legislatures in the past few months, and Vermont recently introduced a bill that would ban neonics entirely. Recognizing that neonics are harmful to bees but commonly used in agriculture, H.4187 looks to prevent spraying of the pesticide by unlicensed individuals and during the summer blooming season to ensure that any use of neonicotinoids reflects proper training and best practices designed to protect pollinators from exposure to toxins.

The full draft can be viewed here.

Thank goodness we have a legislator who understands how incredibly important bees are to the survival of our species. Without natural pollination, food could become scarce or much more expensive, or both. This is not an issue that will capture big headlines, so Representative Dykema is showing she truly cares for the welfare of her constituents and can see the future consequences of current actions. I am both pleased and impressed.