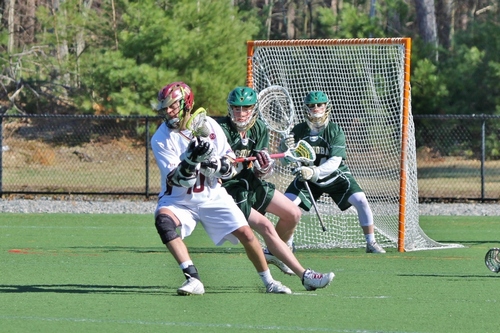 Above: Boys Lax heads into their Quarter Finals today. (photo from early season by Kelly Slovin)

It’s time for an update on Algonquin varsity’s championship bids. It’s been a great week for the T-Hawks. So far, everyone who made the tourneys is still in. And one team is already heading to their Semi-Finals.

In their Quarter Final, sixth seed Boys Volleyball bested lower seed Natick on Tuesday, 3-2. According to Southborough Wicked Local, it was a nail biter. (You can read highlights here.) Tonight at 7:00 pm, they go up against second seed Framingham for the Semis.

On Wednesday, Boys Lacrosse triumphed 5-3 in their First Round against lower seed Northampton. Now the fifth seed team heads to St. John’s to take on their fourth seed team in the Quarter Finals.  That’s this afternoon at 4:00 pm.

On Thursday, ninth seed Girls Tennis quashed 8th seed Marlborough 5-0 in their First Round first round. This afternoon, they’ll challenge Nashoba at 2:30 pm in the Quarter Finals. If they overcome the top seed team, they’ll play in the Semi-Finals this Sunday at 1:00 pm (location TBD).

Since I last posted, Boys Tennis (which bypassed their First Round) learned this afternoon’s schedule. The second seed T-Hawks will play 7th seed Wachusett team in Quarter Finals at Algonquin. That match is set for 3:00 pm today.

Baseball also earned a BYE in first round. In a bit of deja vu, the second seed T-Hawks will play 7th seed Wachusett team in Quarter Finals at Algonquin. They’ll hit home field on Monday afternoon at 4:00 pm.

In one bit of bad news, Softball brackets were listed this week. It appears the T-Hawks failed to make the cut.

And, a reminder, Boys and Girls teams head to their State Championships this Saturday at Westfield State.