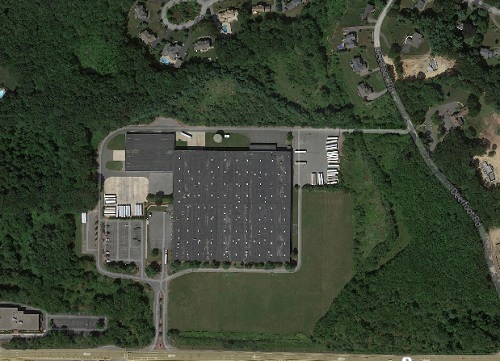 Above: Ken’s Foods is looking to build a 65 foot high addition to the east side of its Southborough building. (Image cropped from Google Maps)

Ken’s Foods is seeking approval for a 95,000 square foot addition to their 325 Turnpike Road facility. The business is requesting a variance and special permit. The Zoning Board of Appeals meeting is scheduled for next week, Wednesday, June 15th.

Attorney William Pezzoni gave a heads up on the plans to fellow members of the Economic Development Committee in April.*

The 65 foot high addition would be to the east side of the building, exceeding standard height restrictions. When asked if that would be a concern to residents, Pezzoni responded that it would only affect three homes.

Pezzoni explained that unstable soil conditions prohibit expansion to the south (closer to Route 9.) To expedite the process, he was researching the possibility of bootstrapping the height allowance to his client’s current ZBA permit. He warned that if timely approval isn’t received, the business will likely have to expand elsewhere and eventually relocate outside of town.

The ZBA approved changes to Ken’s Foods permit in September 2014 to expand hours to operate 24 x 7. At that time, several residents complained that the business was already too loud and disruptive.

One requested change was moving rear bay doors to the front. Pezzoni had said his client would like to eventually, but couldn’t commit.

The board instituted some physical conditions with the changed hours to hopefully improve the situation. But some abutters were skeptical.

Back then, the ZBA reminded residents that they had taken a risk when they moved into a zone abutting an industrial zone.

Regarding the new expansion plans, Pezzoni rationalized to the EDC that it will probably be more acceptable to neighbors than some alternative property uses if the plant is vacated.

*[Editor’s Note: I didn’t personally witness the conversation at EDC’s public meeting. My description is based on draft minutes and verified by another attendee.]

That’s an empty threat. Its a great location for them and, they are not going anywhere. Please don’t allow yourselves to intimidated. And for the record, the land to the east is frequently flooded also. Let them move out so someone else can build a huge greenhouse for all the marijuana they will need down the road.

Ken may not move but there is little the town can do to restrict how much of a nuisance they are to “three homes”. Only three homes…that’s a crappy attitude. I would hate to get quoted dismissing someones position only because not enough of them are affected.

If residents took a risk moving in next to an industrial zone why did the town allow their property to be zoned residential? Where is the master planing for this town? Why is there a developing crisis every two months that affects the residents? Why don’t we know what to expect from that vacant lot across the street?

On the southside there is a new elderly housing complex going in that will have six of eight buildings when only four are permitted. High flood area, busy intersection, kids all over the place and now the town thinks that what we needed down here was more traffic and the shifty engineers that are wrong about how much ground water will be pushed to the neighbors. Will I get an abatement because my basement is a swimming pool or a tax assessment?

The ZBA is weak and approves anything in front of them especially if it means more money for the town. That is not always a sustainable or desirable strategy. Parents used to sell their kids during the depression, looks like the ZBA isn’t waiting and is putting anyone and everything up for sale.

Too bad no one has the spare time to take a crappy job and stand up for the tax payers who don’t have a logo, web page or half a million to pay their way into our backyards.

Have I calculated it correctly, that 65 feet higher means roughly 5 stories? How much revenue does Ken’s bring to the town? An empty building is $0 obviously, but what are the prospects of getting someone else in the building? Does Ken’s own it or is it a lease? I guess my concern is that if this variance is granted, does that open the door to more high rise buildings in town?

High not higher. I’m not sure, but my Google search says about 15 feet per story which would be a little over four stories.

Call me crazy, but why would you buy a house that has a 200,000 sq ft building in your back yard and think that there will be no business going on?

Could the same question be asked in regards to Ken’s?

Why would Ken’s buy a building that required an addition that does not conform with the town’s zoning requirements?

Why have zoning requirements at all if it becomes standard practice to approve variances and special permits?

Listen, they paid less money for those houses because of where they are,… And probably pay less taxes

And I would respectfully suggest that Ken’s would have paid more for their building if it was not subject to the zoning laws with the height restrictions that are in place and for which they are now seeking a variance and special permit.

n you are spot on. To add a little to counter Djd66, the homeowners did think that business would be going on. They also thought “hey the town has a set of rules that the business must follow and I can live with these rules.” IMO variances are meant for special cases where all rule/law was made to be all encompassing and it is obvious that the rule wasn’t meant for that particular case. The only example of a height restriction case that I could think of that would fit that meaning would be something like a church steeple. It is pretty disgusting for a business to be so slimy to give this kind of ultimatum. As “n” said they knew the rules when they moved in. But it is up to us to not want to sell out for the tax revenue.

I also object to the concept that this would only effect 3 houses. The height of the building will be seen by everyone who can see it from the road. Building heights are part of the character of a town which effects everyone.

Note: The generally accepted measure of a story is 10 feet, though it varies widely. (8-9 foot ceilings plus 1-2 feet between floors) It would be safe to call a 65 foot warehouse (floorless) building 6 stories.
https://en.wikipedia.org/wiki/Storey

Put simply, for our town 65 feet is ttaaaaalllllll.

Disgusting for a business to want to mazimize profits? I think you been hanging out with the Lizzy Warren types too much. What ever they build will most likely shield those same houses from route 9 traffic – which if I lived there, it would be a good thing.

Listen, Kens warehouse is nothing in terms on an effect of the whole town. 1)we have a pot dispensary going in. 2) we have 500-1000 units being developed and all the traffic will dump onto to Deerfoot. Those are things to get angry about – this is small potatoes.