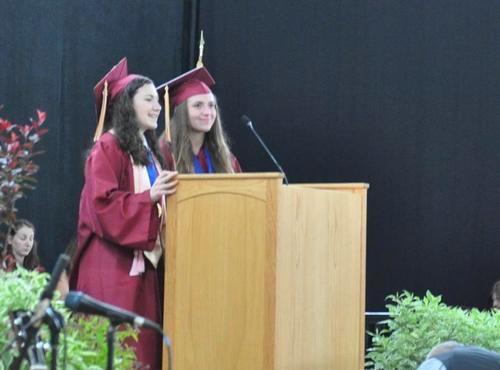 Above: Co-Valedectorians Gabrielle Russo of Northborough and Riley Casey of Southborough (image cropped from photo posted to NSMA’s Facebook page)

When I initially covered graduating classes of 2016 from Southborough, I was missing some information. I finally have it all, plus video of the ceremony. (Scroll down for that.)

A check of that list reveals that one of the two valedictorians (Riley Casey), the Class Essayist (Daniel Fier), and the Class President (Natalie Finn) all hail from our small town. (Not bad, considering our students made up less than 40% of the 364 student class.)

I also followed up with organizations that promoted their scholarships on the blog. Here are the details on Southborough recipients.

Two of the above recipients also received scholarships from the area Chamber of Commerce – Dillon Ford and John Hulton. Algonquin’s Brooks Gingrich was also a recipient.

Algonquin Regional High School graduating seniors and Southborough residents Connor Black and Gillian Moore are recipients of our 2016 scholarship in the amount of $1000 each. Connor will be attending The University of Vermont, honors program, in the school of Environmental and Natural Resources. Gillian will be attending Middlebury College majoring in Environmental Studies with a Chemistry concentration.

Now, enjoy the video of Algonquin’s June 5th ceremony by Northborough Cable Access. (It reveals a mistake in my earlier post. Turns out that Fier and a friend sang the theme from Friends.)