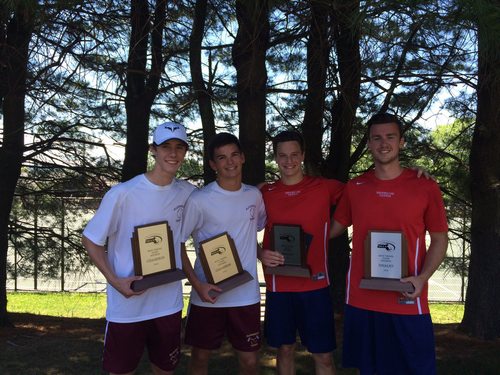 Christian Jorgensen and Riyan Farhat beat out Lexington in the State Semi-Finals for Boys Doubles Tennis at St. John’s on Saturday morning. The win put them in the State finals that afternoon against Brookline. The duo earned the State Championship title, 6-3 6-1.

According to the school paper, the pair are Algonquin Tennis’ first Doubles Team.

Algonquin’s Farhat and Jorgensen made quick work over Caplan and McCarthy in their doubles victory — although it took 11 match points for the Tomahawks to clinch the victory.

“I know, I counted them,” Algonquin coach Gerry Cushing said. “Those match points showed you how tough Brookline was.”

Between the semifinal and final, Cushing said he was thrilled to have two such talented freshmen.

“They came out with laser focus,” he said after the win over the Lexington duo. “I told them to maintain that focus. During the year there would be times they would focus and times where they would lose that focus.”

“Usually I’m not too aggressive,” Jorgensen said. “But today I decided to play closer to the net and it worked.”