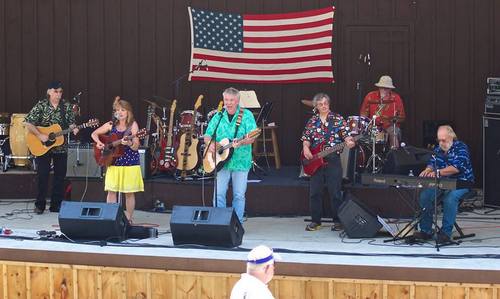 Above: Ring in summer with a concert on the first day of school break – or the following week if rain insists. (image of Chuck and Mud and the Hole in the Dam Band from Facebook)

I posted previously that the free Summer Concert series kicks off tomorrow night (Thursday, June 23) from 6:00 – 8:00 pm with Chuck and Mud and the Hole in the Dam band.

Mauro’s Cafe has joined the sponsorship team for this event, donating Clam Chowder to the concession stand. (That’s in addition to the other kid friendly options already being sold – including hot dogs, pizza, ice cream and snacks.)

The concessions raise funds for Send a Kid to Camp. So, I thought it’s probably time to get an update on the program’s successes and ongoing efforts.

In 2015, 43 camperships were distributed to Southborough children, many for several weeks.

The remaining costs are paid for through donations and Friends of the Southborough Youth Commission’s fund raising efforts at events such as the concert series. We appreciate the collaborative effort of everyone in the community to make these opportunities happen for so many kids. It take a village!

(To support the program, you can also click here to donate to Friends of the Southborough Youth Commission, Inc.)

As for this week’s concert, kids may get a kick out of seeing their former or about-to-be teacher Matt Cassell performing with the band. And the rest of us can just enjoy the band’s original Folk Americana tunes.  (Scroll down for a sample.)

The concert takes place at Neary, on the field by the tennis courts. (So, you may want to also bring your bug spray.)

For more details, click on the flyer. For a look at the band in action, check out the video below. And for a reminder of future concert dates, click here.