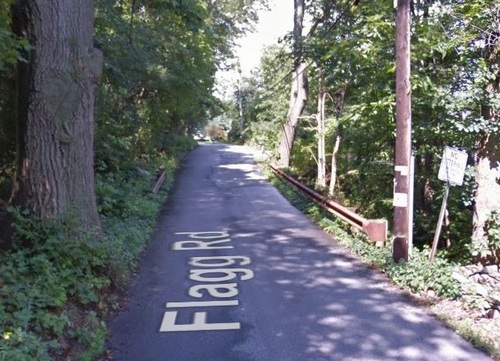 Above: A citizen’s petition will ask voters to pressure officials to install a locked gate at the culvert on Flagg Road to restrict Park Central access. (image from Google Maps)

On October 18th, Southborough is holding a Special Town Meeting. Since I last posted about it, the date moved and Articles for three more Citizen Petitions have been added to the Warrant. (Plus, some Articles that popped up on the Warrant in between have dropped off.)

Two new citizen articles seem to have sprung out of displeasure over the planned Park Central developments. One is to remove Use Variances from zoning. Another would ask Town boards to close off Flagg Road access by lock gate. Park Central access would be limited to a “stub” off of Route 9.

As I shared this summer, the Town is holding the meeting to pursue rebuilding Main Street. (Read more on that, and a citizen article in response, here.) Officials were also looking to revisit disposition of Town properties including Fayville Hall, extend the moderator term by two years, and extend the swear-in period for committee appointments. But those articles will be tabled until spring.

The Town’s Use Variance zoning bylaw came under fire from Town Counsel Aldo Cipriano at an August Planning Board meeting. He explained to the board and residents that the Planning Board’s limited scope on their Park Central review was under the Use Variance decision by the Zoning Board of Appeals. Cipriano said that the Use Variance bylaw allows 5 appointed members to approve zoning that normally would require 2/3 of a Town Meeting vote.

He explained that the state tried to eliminate Use Variances in the 70s. But after pushback from communities, they instead allowed Towns to individually decide whether or not to allow the variances. And he said that the Town had tried unsuccessfully in the past to persuade Town Meeting to strip the language. It looks like voters will get a second shot at the decision this fall.

As for the Flagg Road article, it would:

strongly request that the appropriate authorities, including Board of Selectmen and Planning Board:

. . . when traffic from the currently proposed Park Central development or any development may begin to access Flagg Road, the Town will close Flagg Road at the culvert near the Rt 9 end (at a point near the parcels at #72 and #77 Flagg Road), just northeast of the connector road. . .

Install a locked gate at the closure location in order to allow access for Town emergency vehicles, school buses and other Town vehicles, as has been done at similar locations in Town.

While Park Central residents would be prevented from commuting via the back road to Route 30, it also would keep drivers from Flagg and tributaries from accessing Route 9 directly off of Flagg.

To read the 8/23 draft of the Warrant, click here.

If you are wondering what happened to the Public Safety Building project . . . as I shared this summer, that is being pushed to Annual Town Meeting. The Town is still negotiating a land purchase from St. Mark’s School.

I have never been to a town meeting,… To the people of the Flag Road neighborhood – I will definitely be at this meeting to support you. What went on last week at the 4:30 ZBA meeting is completely insane. I am just glad to hear there is still a path to stop 1000’s of cars from traveling on this road.

I don’t know is the removing use variance only over Park Central or also Ken’s Foods 65 foot addition?

“…with this reversal to rescind the Town’s authorization of the creation of a Southborough Industrial Development and Financing Authority as described in MA General Laws Chapter 40D.”

I don’t create for ad hoc vs. more permanent status or the name change. Does EDC has the same power to issue bonds and such? Because 40D looks pretty scary…

I don’t know that Park Central is the sole the motivation behind removing the Use Variance allowance. Just that it’s a project that got much attention for its use variance lately. (Looking at the ZBA’s decisions over the past year, the only other Use Variance granted was for 84 Main Street (the Burnett House).)

I can say it wouldn’t have been inspired by Ken’s Foods. Ken’s use was allowed by zoning. They received a height variance, which would still be allowed if the citizen’s article is approved. The only changes I could find to the Town Code under the article would be replacing:

upon appeal or petition, variances from the terms of this chapter, including use variances,

upon appeal or upon petition, variances from the terms of this chapter, not including use variances,

Thanks for the great response.

You are absolutely right that this only removes use variances and not height variance etc but what I meant was more could it be Ken’s Foods and other cases are feeding the notation that ZBA can’t be trusted with such authority and Park Central is just the final straw?

I live off Flagg Rd and I would hate to have it closed to Route 9. That is the main way that I come and go everytime I leave my house. This will force everyone who lives in this area to use Deerfoot or Parkerville/Clifford to get back and forth to Route 9. That is nuts. It just forces all the traffic onto those streets and makes them more congested. Has anyone thought this through? I don’t like the traffic situation caused by this new development either but this is a classic example of cutting off your nose to spite your face.

I will now attend this meeting just to make sure that this silly Article does not pass.

Look at the picture above and honestly try to say to yourself…. “This is a Safe two way road right outside the biggest development the town has ever seen.” Nonsense.

I’m very concerned about this “locked gate” on Flagg Rd. I use this road every day to go to and from work, and this would be a major inconvenience to me. This is a very important access road to Route 9 for many Southborough residents, and this will force people on to other roads (Clifford), increase congestion, and add to commute time.

Who came up with this idea, and what problem did you think you were solving? Do people think this will stop the Developer from building the complex? Has anyone looked at the problems this may create on other roads? What would this do to the desirability of the area, could it possibly effect property values, public safety? Has anyone asked?

I will absolutely be at the October meeting, and the issue of road safety for Flagg should be discussed. We should, however, discuss all the options for road safety, and see if there is a less restrictive way to solve this problem.

According to the agenda for Tuesday’s Board of Selectmen meeting, the board will hold a Flagg Road safety forum on September 12th at 6:30 pm in the Senior Center at 9 Cordaville Road.

Add to that — Main Street reconstruction opponents don’t want left turn lanes at Rts. 30 and 85. For westbound traffic on Rt. 30, that will make left turns onto 85 south toward Rt. 9 west more and more difficult. Instead of turning there, cars will continue west on 30 and turn left on Parkerville or Deerfoot to get to Rt. 9 and then to 495. Add this possibility to the Flagg Rd gating proposal, and Parkerville and Deerfoot are set to experience huge increases in traffic.

Hyperboles are not helpful… So are proponents cold heartless land grabbers because part of the package involves “taking by eminent domain” and there doesn’t seem to be much thought into if that is absolutely necessary?

I very much like the left turn and side walks but do wonder what can and can’t be done without using eminent domain and that seems to be one of the idea behind citizen petition:

“c. Cease efforts to obtain by eminent domain or otherwise, any rights in private property for the purpose of converting Main Street to Federal Highway standards.”

If that information was available then I feel I can make an informed decision but as it stands I feel proponents are just trying scare me (pay nothing vs. having to pay a huge amount ourselves which is probably true if we did exact same project but that is unlikely to be case). There are a number of spots that get widened by a foot or more (I have heard average is small but averages hide details)… Are those due to federal standards/guidelines or is it something we want irrespective of federal standards/guidelines?

I think it is important to note that the BOS cannot take anything by eminent domain on their own. The only way they can act in a specific situation is if they are given specific approval which requires a 2/3 vote of Town Meeting.

Very good observation, but the Townies have spoken: Making traffic easier to flow downtown is not going to happen.

Why not make Flagg road one way?