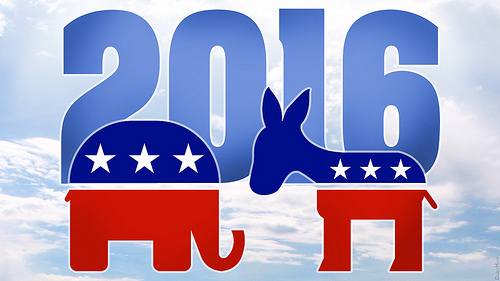 Above: 60% of Southborough voters get to choose between the Republican, Democratic or (even Green-Rainbow/United Independent) primaries tomorrow (Image posted to flickr by DonkeyHote)

There hasn’t been much attention paid to the state primary. So, you may not be aware that the polls are open this Thursday from 6:30 am – 8:00 pm.

It looks like there’s only one contest in our district, and that’s on the Democratic ballot. But judging by what I found online, eligible voters may want to take the time to vote.

Democrats (and interested Unenrolled* voters) will be asked to choose one candidate to serve as Councillor for the Third District. Since no one is running for the seat on other ballots, the winner in the primary is essentially the winner in the election.

I wasn’t sure what the Councillor’s job was, so I looked it up. The state website explains the importance of the role:

The Massachusetts Governor’s Council, also known as the Executive Council, is composed of eight individuals elected from districts, and the Lieutenant Governor who serves ex officio. The eight councillors are elected from their respective districts every two years. The Council meets weekly to record advice and consent on warrants for the state treasury, pardons and commutations, and recording advice and consent to gubernatorial appointments such as judges, clerk-magistrates, public administrators, members of the Parole Board, Appellate Tax Board, Industrial Accident Board and, notaries, and justices of the peace.

Running for the seat are incumbent Marilyn M. Petitto Devaney, Peter Georgiou of Lincoln, and William Bishop Humphrey of Newton. In searching for their campaign pages, I came across this noteworthy story from the Boston Globe:

Because the council is charged with considering the demeanor and temperament of potential judges, critics like to point out blemishes on councilors’ records as well as inflammatory behavior .

Councilor Marilyn Petitto Devaney, for example, has been cited multiple times for driving an unregistered vehicle and received probation after an alleged altercation with a clerk. Devaney, who frequently challenges nominees on their history of political contributions, has twice drawn scrutiny for claims she failed to properly report campaign loans. (read more)

Of the three, only Eldridge will be challenged in the general. Ted Busiek of Littleton is on the Republican ballot as their sole candidate for state senator.

The only other candidate on the Republican ballot is Worcester County Sherriff Lewis G. Evangelidi. The sheriff is unopposed both for renomination and reelection.

No names are listed for any seats on the ballots for the Green-Rainbow Party or United Independent*. (And there is no ballot for Libertarians in this primary.)

*Registered voters who haven’t affiliated with a party are referred to as Unenrolled. (In Southborough, that’s about 60% of the voter rolls.) In Massachusetts, those voters are given the option of which ballot to vote on. Voters registered as “Independent” are restricted to voting on the United Independent party’s ballot.

Unfortunately, I am unable to read the rest of the Globe article without subscribing.

Sometimes that happens with newspaper’s websites if you read too many of their stories in one month. (It’s why I tend to direct readers to articles on Southborough Wicked Local instead of duplicate articles in Metrowest Daily News or the Telegram.)

I can’t in good conscience share the whole article with you. But I can share that the part-time job pays $26,000 annual salary, plus benefits.

And here are some more interesting passages, including Devaney’s defense:

Devaney, a 74-year-old Watertown grandmother, said she is targeted for ouster because of what she described as a probing, independent style. She said she has delivered on pledges, including securing a ban on nominees donating to executive branch officers. She called her personal issues simply matters of misunderstanding, and said the way she was treated over the 2007 beauty supply-shop incident underscored the value of a fair judiciary.

“Now I know what can happen to an innocent person,” Devaney said.

The recent flare-ups and skirmishes between some councilors and judicial nominees have defined the council’s reputation at the expense of all its members and its wider work, said Martin W. Healy, general counsel to the Massachusetts Bar Association. And it has deterred some qualified nominees from applying for the bench, he said. . .

As a constitutional office, the council can be altered or eliminated only by legislative approval at two constitutional conventions, followed by statewide ballot. Senator Brian A. Joyce of Milton led an effort last year to eliminate the council, and he won support from many colleagues, including the Senate president, before losing steam with House leaders.

“We looked like we were going so well,” Joyce said, glumly. Making the best of it, he is now endorsing a council candidate — Jubinville, a trial lawyer and former State Police detective with four decades of courtroom experience.

“Candidly, if we had people of his caliber and qualification serving,” Joyce said, “I would perhaps lighten up on my [abolition] efforts.”

Thank you Beth. I was wondering if there were any contested elections. The Governor’s Council can have an impact if they take their job seriously. I’ll be voting for Mr. Georgiou. He seems to be the most reasonable.

I can provide a bit of background on the Governor’s Council. It was established in the original constitution of the Commonwealth of Massachusetts, and according to their website, “The Council meets weekly to record advice and consent on warrants for the state treasury, pardons and commutations, and recording advice and consent to gubernatorial appointments such as judges, clerk-magistrates, public administrators, members of the Parole Board, Appellate Tax Board, Industrial Accident Board and , notaries, and justices of the peace.”

The most important function of the Council is to advise on judicial appointments. However, most of the heavy lifting regarding the selection of qualified judges actually takes place before the Council hearings. There is a 21-member Judicial Nominating Committee appointed by the Governor. Also, as in the national judicial selection process, the Massachusetts Bar Association reviews nominees and advises on their qualifications. This extensive review has caused many in Massachusetts politics to call for the abolition of the elected Governor’s Council and the establishment of another mechanism for voter input into the process. However, this has not happened, partially because it would require amending the state constitution. (At least one prominent supporter of abolition has endorsed the incumbent, Marilyn Petitto Devaney, which might or might not be significant …)

There are currently five attorneys on the council and three others (Devaney, Duff, and Albano). Of the three candidates on our ballot, Devaney is a former town councilor from Watertown, Georgiou is an attorney, real estate broker, and housing commissioner, and Humphrey is a journalist and political activist.

My choice in this election will be Bill Humphrey. I have met him and he’s really bright and hard-working, has knocked on hundreds of doors over the past few months, and has a clear sense of why he’s running. He is not an attorney (although that may be in his future) but I don’t think that is the most important qualification for this position, as there are so many opportunities for members of the bar to vet these candidates. I believe that a Democratic candidate for Governor’s Council should be someone who will ask the right questions of Governor Baker’s nominees and make sure they represent our values.

As Beth has intimated, Ms. Devaney is often the center of controversy, and while she has made a reputation for herself as the councilor toughest of the nominees, I am not convinced that it’s always for good reason. I also don’t trust Mr. Georgiou as he has always supported Republican candidates (per his recorded public contributions) but is now running as a “progressive” Democrat, and this makes me wonder what his real positions are.

Please consider voting for Bill Humphrey for Governor’s Council! You can read more at his website http://www.billhumphrey.net/.

A debate video is also available from Newton gov’t TV at http://village14.com/2016/09/01/video-district-three-governors-council-debate/

Wow, who knew there was a debate? Thanks for sharing the info and the link.