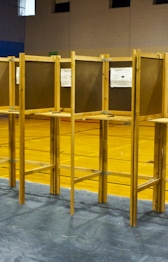 The state primary didn’t draw many voters yesterday. Voter turnout was a mere 3.98% in Southborough.

But there wasn’t much up for grabs here. Only one position was contested, and only on one ballot – the Democratic nominee for Councillor of the Third District.

The Boston Globe confirms Devaney won renomination. She will be uncontested in the general election.

Thanks to all who came out to vote! Turnout was light across the state.