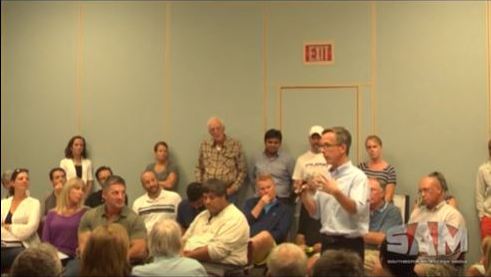 Above: Residents shared their concerns about Flagg Road and exchanged their ideas on road safety measures in a forum hosted by selectmen last night (image from Southborough Access Media video)

It was a bit of a mixed bag. There was some constructive dialogue, issues raised, some angry speeches, and an unclear path ahead. What was clear is Town officials aren’t done working on the problem. And area residents sure aren’t done worrying about it.

The board will revisit the topic at their next meeting on October 4th.

Some residents wanted the board to vote last night to restrict access from Park Central to right turn only on Flagg. Chair Brian Shea told the crowd that petitioners asking to gate Flagg Road should first get a chance to make their case. A hearing on their Warrant Article will be held that night.

Also potentially on the agenda, a re-vote on allowing the Planning Board to hire special counsel. The board’s decision against it last week was vilified by some members of the audience. Chair Brian Shea told the crowd it was a hard decision for him and he may reconsider. When residents shouted it was too late, he claimed otherwise.

According to Shea, Town Counsel advised that tomorrow’s appeal deadline is timed on the Zoning Board of Appeals approval of the 40B project. He pointed out that Planning already said they can’t appeal that decision. That means counsel would be considering an appeal to the 40A project.*

On future agendas, selectmen plan to include ongoing updates on Flagg Road safety. And Selectwoman Bonnie Phaneuf urged fellow members to make a push for MassDOT to restrict Park Central egress to Route 9. She hopes to hold related meetings with MassDOT and the public.

The forum was hosted by the Board of Selectmen, run jointly with the Planning Board. The public was invited (and showed up en masse), along with a representative from Mass Department of Transportation, key Town personnel and Representative Carolyn Dykema.

Selectman John Rooney tried, unsuccessfully, to set a framework to begin a two part discussion. The first part would address exisiting safety problems on the road. The second would look at the impact of a future development at Park Central.

Residents quickly made it clear that they were there to talk about Park Central. Much of the time was spent lamenting the Zoning Board of Appeals’ process and decision. But most of the talk did focus on worries about safety impacts and opinions on how to handle it.

Commenters disagreed on whether one way turns, gating the road, and/or speed bumps would improve or worsen the problem. And some were worried about solutions on Flagg pushing the problem to Deerfoot. But all agreed that adding projected thousands of cars to the road will increase danger to drivers, pedestrians, and bikers.

There were some residents who did want to get going on safety improvements now. That includes the reports suggestions for road striping and speed feedback signs.

Resident Marnie Hoolihan spoke to recruit members to a neighborhood committee. She hoped that volunteers could work together to come up with safety recommendations and report back to everyone. Rooney supported the idea.

Rooney and Phaneuf also answered questions about their back and forth involvement in and conflict out of discussions. Both selectmen have conflicts which prevent them from taking action specifically on the Park Central development.** (Something like authorizing the Planning Board to consult special counsel to appeal the project would fall under that.)

But, as wardens of the road, they are not conflicted out from making safety decisions about Flagg Road, which impacts the safety of all residents.

Residents will also be keeping an eye on future selectmen agendas for the filling of a vacancy on the Zoning Board of Appeals. Freddie Gillespie opined to the crowd that the current situation is rooted in a pro-development ZBA. She reminded that selectmen are responsible for appointing those members, and David Eagle left a vacancy.

*Note: The Planning Board is scheduled to continue its hearing on the Park Central Site Plan Review on 9/19. The application deadline is 9/23. In August, the developer’s attorney made it clear they would push back hard on any further extensions. He will be looking for a decision at that meeting.

**Phaneuf is a member of SHOPC (Southborough Housing Opportunity Partnership Committee). Because of the Affordable Housing component of the 40B, that is a conflict. In addition, her son’s business has a relationship with one of the developer’s businesses. It’s not a legal obstacle, but does cause appearance of potential conflict. Rooney is a tenant in the Park Central office building, which the state has confirmed is a conflict.

in the photograph above forum article, with head down on speakers left side front row is me wearing white shirt, was there only to listen to citizens, my name is mark dassoni and I live in Ashland got interested in flagg rd. issues after zba broke off public comment at their august 24th,planning board doard need legal direction,was happy when chairman said might reconsider vote for counsel,mark dassoni

Last night’s meeting on Flagg Rd safety was an emotional and enlightening one. It is apparent that certain members of our town government were not acting in the best interest of the town.

That said, for the life of me, I cannot understand why the selectman would not allow the planning board to hire outside counsel? You couldn’t possibly deny that there were conflicts of interest on the pro development ZBA. Longer term, we really need to address the fact that developers are representing (or not) the towns best interests here. The selectman have suggested that they don’t want to pit one board against another, but if the ZBA doesn’t listen to the planning board, what choice do they have? And by the way the planning board are elected officials and the ZBA is appointed by the Selectman. So the ZBA makes decisions the town doesn’t want? The planning board wants to act on it and the selectman say no? Why? I just don’t get it? I hope the selectman got the message last night and do the right thing.

Also, with regard to traffic coming on the Flagg Rd out of park central. There is no viable solution to deal with that, other than to not allow it. We struggle to deal with the current situation on Flagg, never mind rerouting 1,000s of additional trips per day.

It was an excellent meeting, it had both emotion and logical back and forth communication, to the citizens who do not agree with ZBA actions you can start a citizens roll call to have members removed from their positions, all that is needed is a petition with 100 voters signatures, say reasons and give it to town clerk to verify names , get selectmen to put it on meeting agenda , public discussion by board and see what happens from there. mark dassoni

I could be wrong but the procedure you outlined is the process for calling a special town meeting. I do not think there is a process that can force the Selectmen to put an item on their agenda (from a practical, political perspective 100 signatures will get you on the agenda)

I am also unsure if there is a process in place for the removal of a board member once in place except by expiration of their term. I am reasonably certain that no process exists for a citizen or Town Meeting recall of a board member (or elected official). The reality is that in the absence of recall by laws, frustration with the performance of an appointed board is properly directed at their appointing authority.

If the Flagg Road, or Main St. or any other group is frustrated with the performance of our government the only real solution is to run a slate of candidates for elected position that will declare themselves on the subject at hand.

As I say, I could be wrong about the recall. Perhaps the Town Clerk can set the record straight.

No special town meeting needed it can be done in executive closed door meeting with roll call petition as only agenda item\ voters voted selectmen selectmen appointed ZBA so voters put out petition and as appointed board the voters in town like at forum needs answers from those who they put trust in \ expirations has nothing to do with it it the face they put out for town interest or their or egos I think it the latter,\ you not wrong but as town selectmen to citizens-voters ZBA is not in the best light now,\ in Ashland we have a roll call working to unseat a board of health member it in works now and ready to be acted on, call Ashland town administrator and ask about it ,mark dassoni.

Call town administration and ask for town bylaws for board conduct and town codes to go with boards mission statement, after ask town counsel. mark dassoni.

The Town Code is available on line http://ecode360.com/SO1070?needHash=true

The recall provisions appear to be part of the Ashland Town Charter (approved by TM, Voters, and the State Govt). Southborough does not have a charter (except for the one granted by the King). We operate by the the powers given to the boards by State Law and Town Meeting. It is not clear to me if Town Meeting can pass a recall by law on its own.

Town Counsel (and the TA) work for the BOS and will only be responsive to their directives.

I don’t have a dog in this fight but I am sympathetic to the Flagg residents. I am just trying to provide information so you can be effective.

go to townhouse, see clerk and ask for a petition sheet, you may need to ask town administrator how to go forward. mark dassoni.