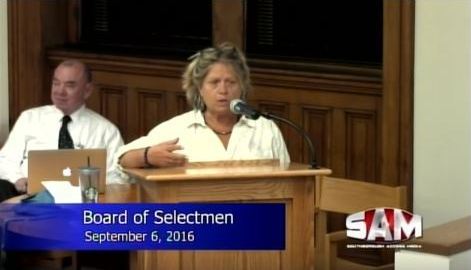 Above: Last week, Freddie Gillespie and Sam Stivers defended their Citizen’s Petition Warrant Article to strip the ZBA of the right to grant Use Variances. Expect them to speak again Monday night at the Planning Board’s hearing. (image cropped from SAM video)

The Planning Board’s meeting on Monday should be an interesting one. As I’ve mentioned in several stories, the board is set to continue its Site Plan Review of Park Central on Monday.

The last time the board met with developer Bill Depietri, he was pushing the Planning Board to wrap up the review in August. He reluctantly agreed to continue it to this week.

Since then, the Zoning Board of Appeals approved the Park Central 40B, in effect triggering a linked Use Variance for the 40A project. That prompted the board to file an appeal on the ZBA decision.

In addition, Monday night’s agenda includes a “Vote on Building Inspector’s Decision on the Park Central Use Variance”.

Following that, the board is hosting a hearing on a citizen’s petition directly inspired by the ZBA’s decisions. Last week, selectmen held a public discussion on the issue. Article sponsor Freddie Gillespie told them that the Park Central decision was the impetus.

The article would strip the ZBA’s ability to grant Use Variances out of the Town Code. Gillespie explained that the Use Variance bylaw gives the board too much power. She believes that zoning defined by 2/3 of Town voters shouldn’t be overridden by a few appointed officials.

The petitioner agreed with some commenters that the bylaw has been used for good results in town. But she argued that Park Central was an “overriding Use Variance that changes the future Fabric of the town”, and that one time was one too many.

With Park Central opponents in the audience Monday night, she may get a more welcome reception than she received from commenters last week.

Commenters last Tuesday were opposed to the proposed bylaw change. They were a developer (John Bartolini, Jr.),  a self-described architect of several Use Variances in town (William Pezzoni),  and the Chair of the Economic Development Committee (Dave McCay). All were worried about making the town unfriendly to business development.

Gillespie pointed out that good projects would likely be backed by Town Meeting voters. Opponents argued that businesses would go elsewhere rather than deal with Town Meeting.

Opponents described positive examples of Use Variance in the past. Even co-petitioner Sam Stivers conceded that as a former ZBA Chair he had approved Use Variances for good projects. But he worried about the risks of improper use.

Gillespie and Stivers failed to get a vote of support from selectmen. Only Selectman Paul Cimino voiced support. Others had questions and reservations. Selectmen opted to wait for more information and share their stance at Town Meeting next month.

Cimino opined that it is up to supporters of Use Variance to convince voters at Town Meeting. He stated that there are more mechanisms to help businesses than a Use Variance. He noted that most examples referred to abutting land used for septic. He followed that a zoning change, like an overlay district, that could fix that.

I agree that being able to grant ANY use variance, including those not allowed or listed in any zone is too much power. The main use I heard which is time sensitive is a failed septic system for businesses but can’t that be a special permit or some other built in flexibility in the zone code instead? Some flexibility is good but this is like saying to your kid, you can have a little ice cream after dinner or you can decide to eat dinner or not and have whatever and however much you want…

I would rather identify these specific needs and build them into zone code either by right or requiring special permit rather than have a giant hole that allows for any and everything to built. Is not like I have heard a ton of different issues that are as good use of use variances…

variance by laws give”s away conservation and open space to highest bidder and for the citizens who see”s neighborhoods being shrunk by developers and expanding buildings, this is how zba boards get development to past, it a zoning bylaw that take”s two-thirds of a town meeting vote to past or not to past, so with town meeting coming citizens get your warrant articles updated and ready for this variances to be heard on, mark dassoni .

Monday night”s planning board meeting should very informational and educational for citizens in need to know zba reasons for park central, i will attend, mark dassoni.

Use variances are very effective tools. This warrant is a reaction to one specific decision and that is no way to make law.

Laws are made by Town Meeting. Zoning laws require a 2/3 vote. A use variance is a tool that enables a small group of appointed people the power to override a 2/3 Town Meeting vote on zoning uses.

I’d call that efficient, but not necessarily effective. Or appropriate…

thank you tim, that why town meeting is governed by town people ,mark dassoni

If friendliness to business and septic failures have been key motivators for use variances in the past, hmm, is there an answer for that?

Sewers. But hardly anyone in Southborough is in favor of sewers. I think this comes from fear of density – and possibly from fear of cost, both legitimate.

Ironically, fear of density might go away if Park Central gets built, since I believe it would bring Southborough above the threshold for affordable housing and thus would exempt us from further 40B overrides of our local zoning code.

Then our local code could protect Residence A acre-zoned areas from density – which is what a lot of residents bought, after all. At the same time, appropriate places for density – Rte. 9 and the business village districts, might improve if sewers made denser development, especially business development, possible.

So, Park Central is still a terrible site for a project of its size – Flagg Rd. seriously cannot handle the traffic demand it adds – but Park Central might have some positive long-run effects. Banning ZBA use variances might seem like a big hammer, but it could prompt us to codify what we want instead.

Does anyone know anything about the costs of connecting sewers and whether it would even be possible? I’d be looking for mainly Rte. 9 connections and mainly costs to business. This could easily be cost-prohibitive, which is why I ask.

Density plus sewer connection is toughest to put together, reason either development or water rates in a high population neighborhood block, variances are good if zba and regulating boards are are on one page, but the zba is not on board, where I live in Ashland we have pasted sewer morotoriums a couple to slow down developments to hook up , in southborough can do that also it call planning for citizens future,mark dassoni.