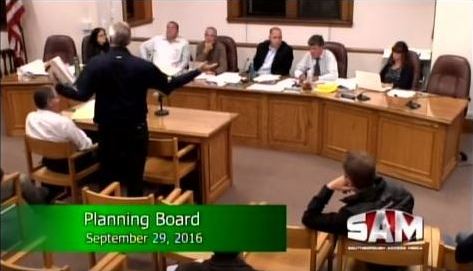 Above: Frustrated with the Planning Board, developer Bill Depietri throws down an apparently unachievable ultimatum and walks away. (image cropped from Southborough Access Media video)

Earlier today, I wrote about selectmen’s decision on Park Central access to Flagg Road. If you’ve been following the saga, you may be wondering what the status of Park Central is.

Last week, I told you that the Planning Board was expected to rule on the site plan last Thursday. And they did – with a rejection. But not necessarily for the reasons you think. And it’s certainly not the end of the story.

The Planning Board vote took place after Depietri walked out of the continued public hearing on Thursday night, refusing to extend the deadline.

You can expect to see the project back in front of the Zoning Board of Appeals sometime soon. Developer Bill Depietri made it clear that he would appeal a rejection.

The application deadline was Friday, September 30th. If the board didn’t act, the project would have been constructively approved. Prior to his walkout, Depietri gave the board an ultimatum: Write up a list of topics to discuss at their next meeting by 5:00 pm on Friday. Nothing could be added to the list after that. If he considered the list reasonable, he would extend the deadline.

Chair Don Morris, and Depietri’s attorney, interjected that the board couldn’t meet on Friday due to public notice laws. Depietri replied they could work on the list that night and email him, and he would sign the extension the next day. Morris explained that the extension couldn’t be granted without a vote. (In other words, the board needed to vote that night, and the applicant had to be there to make the extension request.)

Depietri’s response was “that’s your problem”, soon followed by “good night” as he walked out. In giving his ultimatum, Depietri made clear that if they denied the project, he would be back in front of the ZBA “and probably court after that”.

Following the walkout, the board rejected the plan as having failed “to furnish adequate information required by the bylaw” and for being too “intrusive on the needs of the public”.

In past meetings, Depietri had accused Planning of dragging its feet. On Thursday, he claimed the board failed to meet promises made in the past two meetings, by not providing conditions in writing.

The developer complained that he has been jumping through hoops to quickly make changes, but still gets nothing from them in writing. He told them he was “not going to do the dance anymore” and was tired of their meetings and paying his attorney to attend them.

Earlier in the meeting, members each assured Depietri they were willing to do their duty and work through the site plan with him. But it was clear they were far from ready to approve a final plan. It was also clear that a thorough review was expected to be a lengthy process. (Especially, since the Conservation Commission hadn’t finished its review.)

Morris again made clear he resented the process forced on them by the ZBA:

this vortex of doing it backwards and doing it with so many items open, doing it so contrary to the way the Planning Board over the decades has handled site plans. . .

By us agreeing to do this backwards, it’s high risk. It’s going to result in another document that’s highly questioned with omissions and errors, contradictions

After Depietri walked out, the members opined that they couldn’t make a final list of topics that night regardless. They believed that the process required time for the public to review and comment on plans and conditions.

When the denial appeal does reach the ZBA, project opponents will hope the board will better serve them this time around.

In hearings over the past year, only three members of the ZBA sat on the case. One, David Eagle, has since left the board (having moved out of town the morning after voting to approve the project.) The behavior of another, former Chair Leo Bartolini, in Park Central hearings has been the root of two petitions asking selectmen to remove him from the board.*

Presumably, this time the appeal would be heard by five ZBA members.

*Note: On Tuesday night, Chair of the Board of Selectmen, Brian Shea, acknowledged receipt of the second petition. He said that having been away, he hadn’t had a chance to deal with it yet.

The next BOS meeting is scheduled for October 17th. That is also the night that selectmen will likely vote to appoint someone to replace Eagle on the ZBA. They have at least one more candidate interview scheduled for that night.