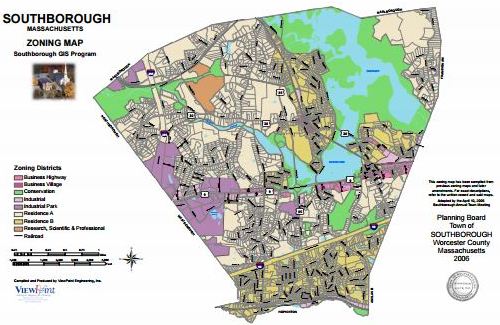 Above: Zones for land use in Southborough are defined by Town Meeting voters. But under current Town Code, Southborough is in the minority of Towns that allows ZBA members to grant Use Variances. Some residents are hoping to change that next Tuesday night. (image from Town website)

Next Tuesday night’s Special Town Meeting isn’t just about Main Street. One of the Articles on the Warrant asks residents to remove Use Variance language from the Town’s zoning code.

Proponents of the article are passionate about what they see as too much power vested in the Zoning Board of Appeals.

Town zoning laws are determined by a 2/3 vote of Town Meeting voters. But Southborough is among the minority of towns in the state that still allow the ZBA to grant a variance, overriding voter-approved use restrictions.

Three members of the ZBA can decide that a Use Variance is in the community’s best interest. (That includes allowing a commercial/industrial project in a residential neighborhood, large scale development in a commercial zone, etc.)

Responding to a presentation to the Board of Selectmen last month, opponents to the article pointed to times that Use Variance was used well and in the Town’s best interest. (Examples centered around allowing septic for commercial properties on abutting residential land, thereby keeping developments off that land.)

But Article 6 proponents argue against trusting that much power in the hands of three appointed residents. And Selectman Paul Cimino suggested there may be other ways to amend the zoning law in the future to allow zoning fixes for the types of “good”examples given, like allowing an overlay district.

The ZBA drew a lot of ire from Flagg Road area residents in the past year over their Use Variance approval for 139 townhouses to be built at Park Central next to the 180 condo 40B project. The approval was despite widespread concern about adding so much volume to the narrow, tree lined road. Article 6 proponent Freddie Gillespie argued that it was bad call, which is one too many.

Now proponents are asking me to share their flyer asking residents to vote yes for Article 6 next week.

Both selectmen and the Advisory Commitee opted to hold off until Town Meeting to vote whether to support or oppose the Article.

I’ll be honest – I haven’t found the time to watch the Planning Board’s public hearings on the Article – and I’m not sure I will. If I do and learn anything new worth sharing, I’ll post later this week. In the meantime, you can check those out through Southborough Access Media. The hearing was opened on September 19th and continued to September 26th.

Town Meeting is being held on Tuesday, October 18 at 7:00 pm in Trottier Middle School’s auditorium.

Babysitting is being provided this year through Southborough Recreation for just $5. (But pre-registration is strongly requested.)

This is tough. I agree that allowing a three-person appointed committee this much liberty to grant variances is potentially problematic, even dangerous. There should bee oversight, no question. However, in this town, requiring a 2/3 majority to approve anything is a major obstruction. There will never be any development anywhere in town because a tree might be removed or a sidewalk might be required, either of which will tick off enough individuals to rally their neighbors to torpedo a project. Is there some option in between, one that would put limits on the ZBA and allow at least some development to proceed from time to time?

Are we as a community that different from the approximately 80% of towns in Massachusetts that have not given the right to grant special use variances to their ZBA?

Commercial development hardly seems to be at a standstill in the 80% of Massachusetts that allows the community to make these decisions instead of passing it off to 3 (4?) people appointed to a ZBA.

We as a town have created a set of rules. When the path to breaking those rules is sufficiently easy, people stop viewing them as rules and consider all possibilities as options. Ken’s Foods height variance is great example. We have a law on maximum building height for the town, there was no need for Ken’s to break this rule, but it was better for them if they did and because they knew they could, they did, I would too. But if there was no use variance process, they wouldn’t have even considered going over the height and would have come up with the best option giving the actual constraints.

This is a classic case of how loopholes are created, but unfortunately, in a capitalistic society, well intended ideas will always be exploited. Classic case of the bad apples ruining it for everyone.

Article 6 would still allow height and other variances. It only proposes taking away language specific to Use Variance.

A yes vote put stability, confidence to voters-tax payers that they are worth more than developers pressures , ZBA has proven that they are only ego driven by greed and developers blindness to citizens , selectmen do what planning board did and hear your voters pleas for help, voter voted you in selectmen now earn their trust at town meeting, Mark Dassoni .

I no longer live in wonderful Southboro, and have lived many places as a military spouse. Very often these small, appointed zoning boards are comprised of those with ties to the construction industry. And very often it’s corrupt. So getting 2/3’s agreement isn’t always easy? Who says it should be?