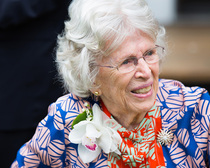 [Editor’s Note: In August, I shared the news that Elaine Beals had passed away. At the time, an obituary wasn’t published, just a brief notice of her death. Now that her memorial has been scheduled for Saturday, the full obituary honoring her life is available.]

Elaine (White) Beals, 93, died peacefully at home on August 21 with family members at her side. The youngest of five children born to Rebecca Wilder White and Joseph Nelson White, owner of the White textile mills, she was born and raised in Winchendon, MA, where she met and in 1944 married Philip C. Beals, who died in 2008.

She is survived by one sister, Pricilla Lindsay, of Kailua, Hawaii; four children, Susan B. Sargent of Washington, D.C., Whitney A. Beals of Southborough, Molly B. Millman of Cambridge, MA, and Nancy B. Donaldson of Lincoln, MA; twelve grandchildren; three step-grandchildren; seven great-grandchildren; three step-great-grandchildren; and numerous nieces and nephews. A son, George L., predeceased her in 2000. A caring, loving, and enduringly supportive mother and grandmother, she pursued many interests during her long life, chief among them being a strong dedication to land conservation. She was a founding member of the Southborough Open Land Foundation, serving as its treasurer for several years, and also served on the town’s Open Space Preservation Commission.

Following their move from Shrewsbury to Southborough in 1950, she and Philip acquired 190 acres of farm and forest land in the 1960s to add to the original 55, later protecting all of it from development in perpetuity through the granting of conservation restrictions. In her honor, the Open Land Foundation established the Elaine Beals Conservation Award in 2005, awarding it annually to a local resident who has shown outstanding leadership in environmental conservation.

She was graduated from the Masters School in Dobbs Ferry, NY, in 1941 and was a member of the class of 1945 at Wellesley College. Among her numerous non-profit and civic activities, in the late 1960s she began volunteering at the Edward Street Day Care Center in Worcester, soon joining the board of directors and serving for many years. Her sporting activities included skiing in Vermont’s Mad River Valley and in Colorado, tennis (a great backhand!), swimming, and fly- fishing for Atlantic salmon on the Miramichi River in New Brunswick. She and Philip enjoyed traveling, too, taking several trips abroad with a wide range of friends. A lifelong gardener, she was an active member of the Southborough Gardeners and the Worcester Garden Club. Also an avid reader and a woman of faith, she belonged to Pilgrim Church in Southborough for 66 years, singing in the choir for nearly 50 of them.

There will be a memorial service on October 22 at 11:30 am at Pilgrim Church to celebrate Elaine’s life. In lieu of flowers, please consider a contribution to the Southborough Open Land Foundation (www.solf.org), to Pilgrim Church (P.O. Box 281, Southborough 01772), or to the Michael J. Fox Foundation for Parkinson’s Research. For online condolences, please go to www.shortfuneral.com.