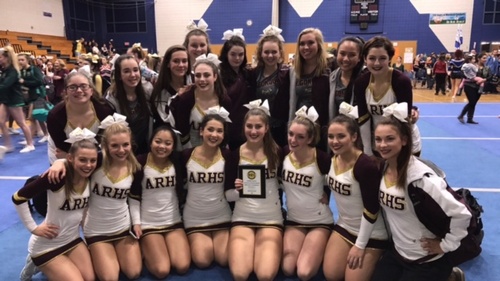 Above: Algonquin’s Cheer Team has a lot to cheer about this season, including their own performance. (contributed photo)

Algonquin athletics is having another great fall. Only one varsity team is not currently in or headed into tourneys.

That’s because Golf already finished their journey on Halloween. Last Monday, the Division 1 ARHS Golf team came in 5th out of 12 teams.

Girls Volleyball is on top this season. With only two losses and 16 wins to this season’s record, the T-Hawks will hope to rollover 8th seed Natick tonight. Bypassing the first round, they’ll compete in quarter-finals at 5:00 pm tonight on their home court. A win would put them in the semis November 9th at 6:00 pm.

Gonk Field Hockey will play in their division semi-finals this evening. The team already earned a Bye on its first round and won its quarter finals.  The 4th seed team bested 5th seed St. Peter-Marian on Friday afternoon, 2-1 in overtime. Now they have to take on top-seed Marlborough at 7:00 pm at Grafton.

Boys soccer is also playing at 7:00 pm tonight. The 6th seed won its first round vs 11th seed Fitchburg this weekend, 3-0. Now, they head to Shrewsbury to play the third seed Colonials in the Quarter Finals.

Fourth seed Girls soccer will host lower seed Westborough tomorrow night, November 8th, at 5:00 pm for the Quarter Finals. The team bypassed its first round. If they win, they get to play in the semi finals on Thursday.

This Saturday in Worcester, expect a big turnout from T-Hawk Nation to help cheer on ARHS Football. The team will be vying for a slot in the state championships.

The third seed Football team already conquered second seed Wachusetts in the division semi-finals on Friday, 48-27. Their competition in this weekend’s Finals is Shrewsbury, a team they beat 31-21 just last month. They’ll be playing at Foley Stadium this Saturday at noon.

Meanwhile, the T-Hawks’ biggest supporters, have victories of their own to crow about.

The Algonquin Cheer team competed at the Central Mass Leagues competition on Saturday. They beat out Shrewsbury and Wachusett, coming in second to Shepherd Hill.

Have a photo of your favorite team in action to share? Email mysouthborough@gmail.com. (Until then, expect to keep seeing pics from past seasons!)