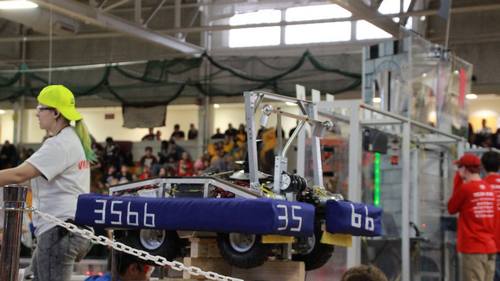 Above: One of Team 3566’s robots from a competition last spring, where they won an Entrepreneurship award. Next week, visitors will get a chance to drive one of the team’s creations. (image from Facebook)

The public is invited to meet FIRST TEAM 3566, Gone Fishin’. You’ll also have a chance to tour their facility, and (most importantly) drive a big robot.

Wow, should we expect state Sen. Jamie Eldridge to be arrested in a sit-in protest at this event too? Although the press photo “optics” would be terrible, it would make more sense than his imaginary “speaking truth to power” display on the streets of Cambridge. What has to be remembered — despite all the grandstanding by politicians — the true “minimum wage” will always the same: $0.00 per hour, also known as no job at all.

Phoenix, AZ — After seeing a decline in earnings for the first time in nine years, McDonald’s plans to do something no other restaurant of its kind has ever done before; open a store run entirely by robots.

The store is set to open July 4th in Phoenix, Arizona once the state-of-the-art robot remodel is complete. The restaurant will still employ a small team of human employees to insure all of the robots are working correctly, the food and cleaning supplies remain stocked along with removing the money collected by the robots. Visitors to the restaurant will see these new robots working in harmony at a speed of 50 times faster than the average McDonald’s employee, with no chance of error. If the test launch for the store is a success, people can expect to see robots working in McDonald’s restaurants all over the country and the world.

The store’s new manager, Peter Gibbons, told CNN that he has worked with the robots at a product development facility in San Francisco for the last six months and speaks highly of the machines.

“These things are great! They get their work done in a fast and orderly manner, plus they don’t ask for cigarette breaks.”

37-year-old Paul Horner, a spokesman for McDonald’s told reporters that because of the demand for a $15/hr minimum wage, the company has been playing with the idea of a restaurant run entirely by robots for years and believes their “McRobots” are the answer.

“With the high demand for a minimum wage of $15/hr and the protests getting worse every day, this is something we had to implement. Plus with the tremendous margin of human error, poor hygiene, lack of education, laziness, as well as the recent advancements in artificial intelligence it just make sense to automate our restaurants now rather than later.”